Udaipur :  Zinc Football Academy team defeated FC Goa 3-0 in a friendly match between the Under-18 teams held on Friday at Don Bosco College Ground, Fatorda. Both the teams were on their toes for most part of the first half with both the teams creating ample of chances. However, Zinc Football Academy team sneaked one in midway through the first half after an excellent run by winger Jangminthang Haokip from the left flank who then passed it to striker Babar for an easy one-on-one finish.

It was a different story in the second half with the away team dictating the play from the very beginning. With some aggressive pressing, Zinc Football Academy doubled their lead after Babar’s long shot was deflected off the FC Goa goalkeeper but straight to Jangminthang who simply tapped the ball home.

With FC Goa team putting the numbers forward in the hope to reduce the margin, Zinc Football Academy scored the third and final goal of the match during the final few minutes, courtesy of an excellent through ball by midfielder Sandeep Marandi to send Subhash Damor sprinting from the right flank. Subhash cut back and fancied his chance from outside the box and he did manage to beat the goalkeeper with a thunderous strike.

Speaking after the match, Mr Gavin Araujo, Head Coach, FC Goa (Under-18 Team) said, “It’s been an overwhelming experience to play against Zinc Football Academy team. I was impressed with the quality of their players and the way they were communicating on the pitch. They have a bright future. Good luck!”

The Under-18 footballers of Hindustan Zinc-initiated Zinc Football Academy, based out in Udaipur, are currently on an exposure tour to Goa.

Zinc Football is an initiative of Vedanta Hindustan Zinc to usher in a footballing revolution in Rajasthan. It is a one-of-its-kind grassroots development programme with technology and data analysis at its core at Zawar near Udaipur, Rajasthan. The programme is using football as a tool for social and community development and ensuring young boys and girls have a platform to express themselves through football. 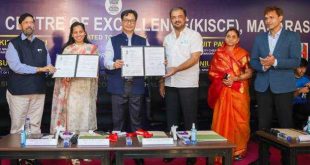