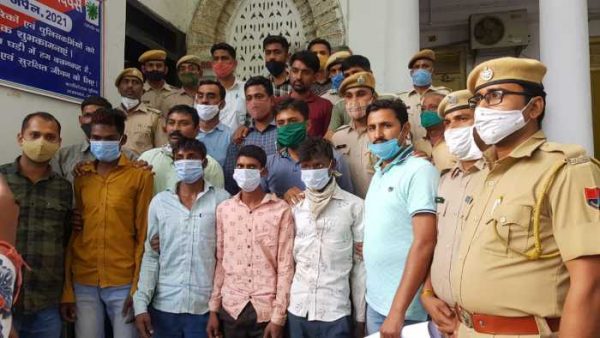 Udaipur : After a week long intense investigation, Udaipur police succeeded in cracking the double murder case of an elderly couple that had taken place in Kolyari settlement of Falasiya block in Udaipur district on April 10.

“It was a big challenge for the police to solve the blind murder mystery but after intense search and investigation, our teams arrested four men for the crime. An additional SP, three Deputy rank officers, 4 SHOs and their teams owe the credit”  Udaipur SP Rajiv Pachar told the media.

Devilal (68) and his wife Pushpa Devi (64) were found murdered in their homes in Kolyari village and the police was told that the man ran a grocery store in Falasiya and also lended loan against jewelry. The couple didnt have children and the complaint was given by Devilal’s brother Dhadamchand.

Prima Facie the police guessed that the assailants were acquainted with the couple and might have trespassed the house with  the intention of loot. Cops scrutinised the money lending details register and found that Devilal had lended huge amounts to borrowers in bordering villages of Panarwa and Falasiya settlements. They made a list  of suspects with tinted backgrounds who had taken money from the deceased.

“One of the accused Dinesh Garasiya (21) had in 2020, taken loan from Devilal while his aide Kamlesh(22) too had had a financial deal with him some time back. The men knew that they could get huge cash and many ornaments from his home. Hence the two men planned the loot with the help of two other men Pyarchand (22)and Narayan(21)” Pachar said.

The assailants entered  through the terrace and while they ransacked the rooms in search of keys, the couple woke up to the noises and resisted them. The accused stangled the couple with two towels and later slit their throats with shaving blades.They decamped in a hurry with some cash they could find.

The District Special Team led by Hanwant Singh, SHOs from Jhadol, Falasiya, Panarva and Goverdhan Vilas held the intense analysis both on technical grounds and on  the basis of the CCTV footage. Old criminal history of suspects in the area were considered while informers too were activated who gave important leads in the case. Police came  to know that four of the suspects were spending quite a lot of money on alcohol since a week and when these men were interrogated separately, they confessed to the crime.