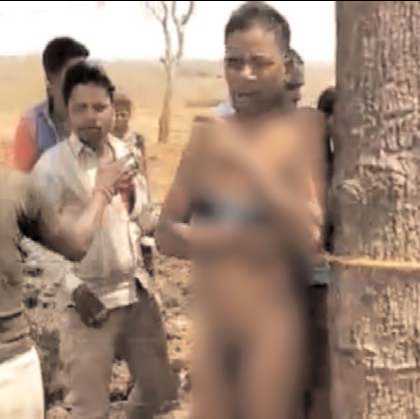 Udaipur : An FIR has been registered against more than 10 persons for reportedly stripping and thrashing a police constable in Rajpura village of Ghantali police station area on Saturday. The constable Lalu Ram Kharadi (43) was stripped completely, tied  to a tree and beaten after he was allegedly found in a compromising condition with a 40-year- old widow in her house in the village.

While the constable said that he did not do anything wrong,but had gone to the woman’s home to ask for  the 15 thousand rupees which he had given her as a loan some time back. On the other hand,  the woman’s relatives and some villagers alleged the duo were in an illicit relationship for the past two years and the woman was into hooch business.

Lalu Ram is posted at Pipalkhunt and hence the question raised  that despite the weekend lockdown, why he came to their area leaving his duty place. The incident was videographed which went viral on social media. When the police were informed  of the incident, cops from Ghantali station rushed to the spot and rescued the constable while the woman , who too was dragged publicly, was taken under police  protection seeing the public fury.

“The constable has given a complaint against few persons, one or two are named while he said he didnt knew many others involved in the incident. He has sustained some injuries and is admitted in the civil hospital at Pipalkhunt. There is no cross case as we have not received any  complaint from the widow or anyone among the villagers. The woman and the constable’s  statement would be recorded on monday and the truth would be known after investigation” SHO Ghantali Police station Rakesh Katara told Udaipur Kiran.