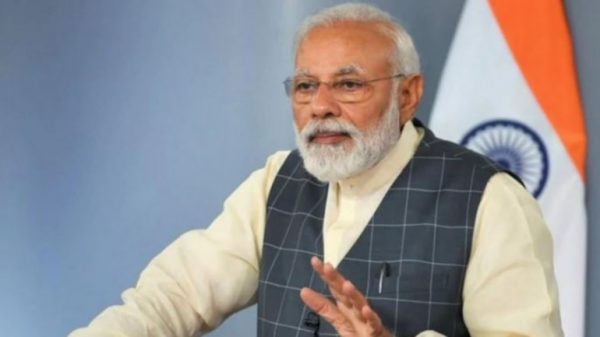 Prime Minister Narendra Modi says decision on Jammu and Kashmir is inspired by nationalism and not politics; in an interview to the news agency, PM Modi assured J&K to develop according to the aspiration, dreams and ambitions of locals; government achieved exceptional results through ”Spasht Neeti, Sahi Disha.

Prime Minister Narendra Modi has reiterated that Jammu and Kashmir and Ladakh will be developed as per the aspirations and ambitions of the local people.

In an exclusive interview to a news agency on completion 75 days of Modi government’s second tenure, the Prime Minister likened Article 370 and Article 35(A) to chains that have now been broken, and the people in the region “will now shape their own destiny”.

Every government benchmarks itself over the first 100 days, the PM has compressed his report card to 75 days. He began the interview by answering questions on revocation of article 370 saying it is welcomed by many and opposed by some…

Responding unequivocally, PM Modi said that the people of India, irrespective of what their political preference, have supported the steps taken in Jammu, Kashmir and Ladakh. This is about the nation, not politics. The people of India are seeing that tough but essential decisions that were earlier assumed to be impossible are becoming a reality. He added that those who have opposed the decisions about Kashmir are the usual vested interest groups, political dynasties, those who sympathise with terror and some friends in the Opposition.

The PM has a clear view on the issue with clear approach– instead of the vicious cycle of poverty, the people need more economic opportunities. For years, intimidation ruled the roost. Let us now give development a chance.

He also assured people from these regions that they will develop as per the wishes of local people, their dreams and ambitions with the top most aim to boost development and bring peace.

He added that from BPOs to startups, from food processing to tourism, many industries can avail of investment and create opportunities for the local youth and that Education and skill development will also bloom.

Speaking about concerns of people over democracy, the Prime Minister said that people voted in large numbers during the Panchayat elections last year, which went away peacefully. He expressed satisfaction that now Panchayats are back at the forefront of furthering development and human empowerment. The results of these efforts are for all to see. Swachh Bharat, rural electrification and other such initiatives are reaching the grassroots. This is what democracy truly is. He added that he has requested the Governor to work towards organising Block Panchayat elections too.

Speaking about other issues, PM Modi said that the government has come back with a stronger mandate. What we were able to achieve in the first 75 days was the outcome of the robust base we were able to build in the last 5 years.

The PM said the first session of the 17th Lok Sabha has been a record-creating one — it was the most productive session since 1952. The government also set a new record of passing a record 36 bills in a single session, including historic ones such as J&K Reorganisation Bill, 2019 and Triple Talaq Bill.

On the National Medical Commission Bill, the Prime Minister said earlier governments, too, had given a thought of reforming health sector but could not go through with it. NDA govt however came out with the bill which is a far-reaching reform in this space containing multiple reforms that curb avenues of corruption and boost transparency. He added that now more talented youth can take up medicine as a profession which will help us increase the number of medical professionals. He also said that Ayushman Bharat is bringing about a revolution in the healthcare sector increasing awareness as well as affordability of quality healthcare, especially in tier-2 and tier-3 towns.

Besides, he said that his government has made several big-ticket announcements for farmers, infrastructure, traders, workers, start-ups and more.