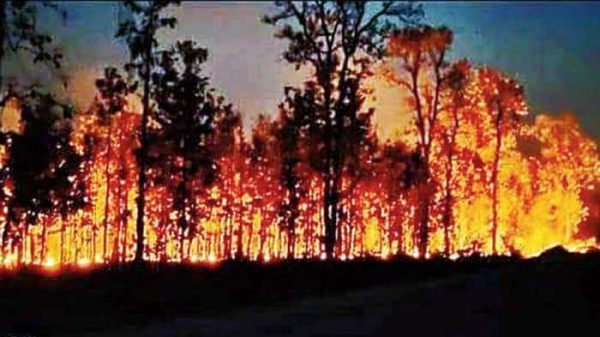 Udaipur : Forest department and villagers toiled for hours on Friday to contain the fire in Kewde-ki Naal sanctuary area of Udaipur district on the Banswara mega highway road.

The fire had broken out on Thursday morning  and spread up to several kilometers, though  the forest authorities denied it to be a serious one and said that it has affected a patch only. Villagers and officials were said to be on the spot till late evening trying to douse the fire which continued to spread further.

Former CM Vasundhara Raje in her tweet on Friday, had urged the district administration to take effective rescue operation to hold the fire from further spread and loss. Meanwhile, DCF Mukesh Saini said reasons for the fire is yet unknown.

He said the department has deployed labour and is taking help of the locals to contain the flames. Sources said since  the fire has been on a stretch for two days, many trees would have been burnt and loss of wild life is also feared, however, only after the flames are contained, any assessment could be made of  the loss. Experts say, there could be many reasons for the fire.

Bizarre tribal custom of ‘Magra Snan’ is one of them as  the tribal community offer fire to ‘Magra Bavji’ or the hill god on accomplishment of any wish. The practise is generally observed around the time of Holi festival or after that.