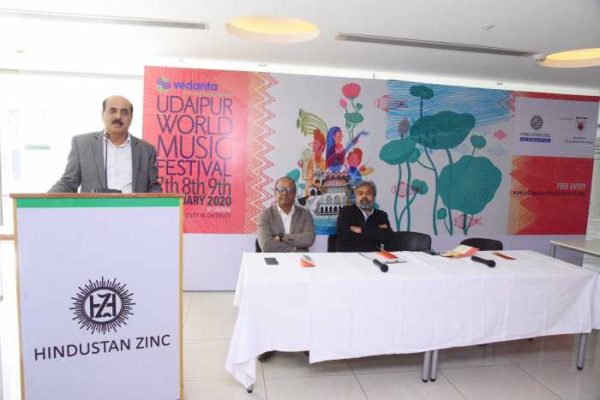 Udaipur : Vedanta Udaipur World Music Festival, India’s biggest world music extravaganza, will be held this year from 7th-9th February in the beautiful city of lakes. The fifth edition of the festival will witness the presence of over 150 renowned musicians from over 10 countries including Spain, France, Switzerland, Kurdistan, Iran/ Lebanon, Portugal, India and many more. With a footfall of over 50,000 people every year, the festival is one of the biggest performing arts attractions in the country. Mr. Sunil Duggal said: “With the Vedanta Udaipur World Music Festival, we want Udaipur to be identified as the cultural capital of India. Hindustan Zinc has always been a frontrunner to promote such diverse forms of art and culture, and this makes a great setting for the theme of this edition as well – Unity in Diversity. Hindustan Zinc aims to promote the culture and a plethora of art forms, while making this edition of the Vedanta Udaipur World Music Festival an even bigger success than the previous editions.”

Mr. Swayam Saurabh said: “Hindustan Zinc has considered a responsibility to promote the culture and art of Udaipur. Vedanta Udaipur World Music Festival is one of the biggest platforms that supports our vision of promoting culture and we are very proud to have associated with this.” Mr. Sanjeev Bhargava said: “It is the time of year when music from across the globe sets its feet in India and presents a unique amalgamation of culture, tradition, language and thoughts. We are elated to bring the fifth edition of this unique and most awaited music festival to music lovers where one can enjoy all genres of music. This festival also gives chance/ platform to local artistes to showcase their talent. The success of this festival in past years has grown immensely and we look forward to the guest attending and enjoying this year’s performances as well.”

Through planned curation, on-ground events and artiste interaction, the festival will be a microcosm of a diverse yet unified world. Spread over three picturesque venues, it offers immense diversity in music that celebrates different moods of the day right from a morning meditative raga to personifying romantic music at its best played beside the lakes in the afternoons. Evenings will bring spirited youthful music that brings together people of all age groups. Besides, the festival also features local Rajasthani talent. The festival features unparalleled live performances and celebrates cultural diversity at its best.

In a time where we must embrace diversity, the fifth edition is built around the concept ‘We are the World: Unity in Diversity’ and as such emphasizes the need for spreading love & the message of unity in diversity through music. The festival in its 5th year is also dedicated to the celebration of 150 years of Mahatma Gandhi. The Vedanta Udaipur World Music Festival will commence with a special Invocation and Dedication curated for this inaugural tribute to Bapu and Martin Luther King Jr, celebrating 150 years of Mahatma Gandhi by Sudha Raghuraman (India) and Jeffrey Mpondo (France ).

The festival features 6 venues spread across Udaipur city, which

include Welcome concerts at Maharana Pratap Airport & Udaipur Railway Station for a showcase of undiscovered Rajasthani artists and a Workshop at MMPS School for the students of Udaipur.

The main stages are:

The festival received a special coverage in CNN Travel Trends in March 2019 which was witnessed by over 354 million households in 200 countries, endorsing the festival as one of the biggest destination music festivals of the world.

Disruption caused by the pandemic must be seen as an opportunity to radically reform our health sector: Vice President

The theme of the event is the Emerging Delightful Destinations, which speaks of the tourism …