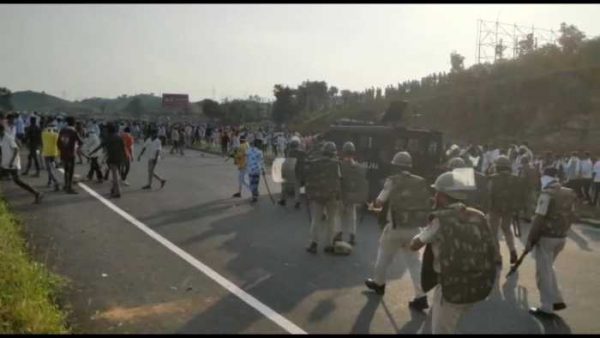 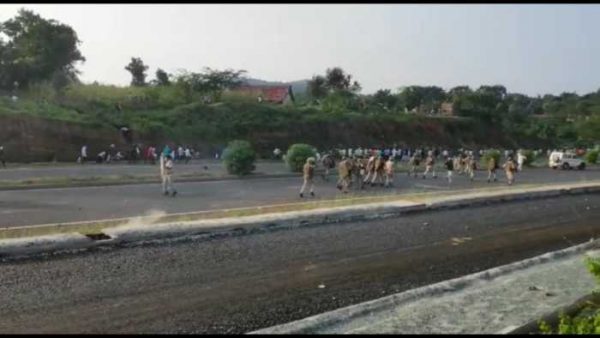 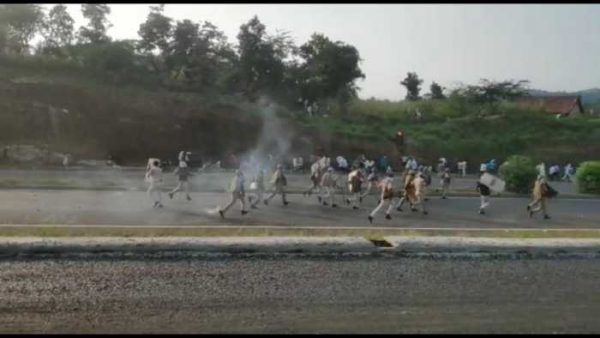 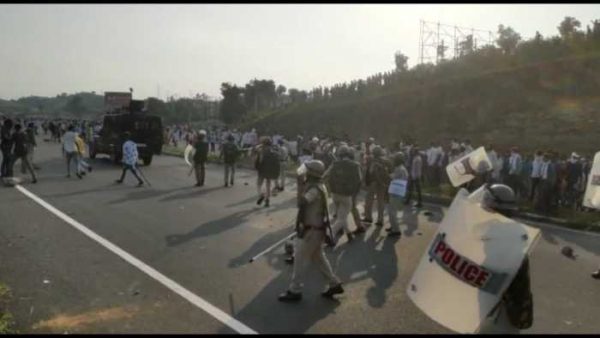 Udaipur : Hundreds of tribal youths came out on the National Highway-8 near Bhuwali in Dungarpur on Thursday and protested aggressively on the Udaipur- Ahmedabad road leading to blockade and massive traffic jam which disrupted vehicular movement for many hours. They pelted stones at cops, damaged some vehicles and even set a car ablaze. Police had to fire tear gas shells to control the mob that created ruckus on the road. Many cops including Bichhiwada SHO and the driver of SDM sustained injuries. Additional police forces were sent to hold the situation and teams cleared the blockade from the road later afternoon. Traffic routes were diverted through interior village roads for the buses and cars to move on.

The youths had been camping atop Kakri Doongri hill in Bichhiwada of Dungarpur district for a fortnight and have been mainly demanding the vacant 1167 seats of REET to be filled by ST candidates. They have 31 other demands too including a separate state. On Thursday noon, the protestors came down and blocked the roads with huge stones near Bhuwali. They held sticks and stones in their hands.

Additional forces were sent from Dungarpur headquarters. Meanwhile the policemen diverted traffic to prevent any untoward incident. Vehicles from Udaipur were diverted towards Motli turn to Dungarpur city and further towards Bichhiwada while vehicles from Ahmedabad side too were diverted through different roads towards Udaipur. Officials were trying to hold mediation talks with the tribal leaders to resolve the issue till late evening.

According to police sources, the tribal youths carried stones wrapped in clothes and hurled at the police teams which tried to move them away from the road. Additional SP Ganpat Mahawar sustained head injury who was rushed to the nearby hospital while more than a dozen cops too were said to have been injured. Dungarpur Collector Kanaram and Superintendent of Police Jai Yadav too reached the area and took charge of the situation. The authorities kept apprising situation to higher officials while they tried to speak to the tribal leaders to pacify the protestors and deal with the situation amicably.