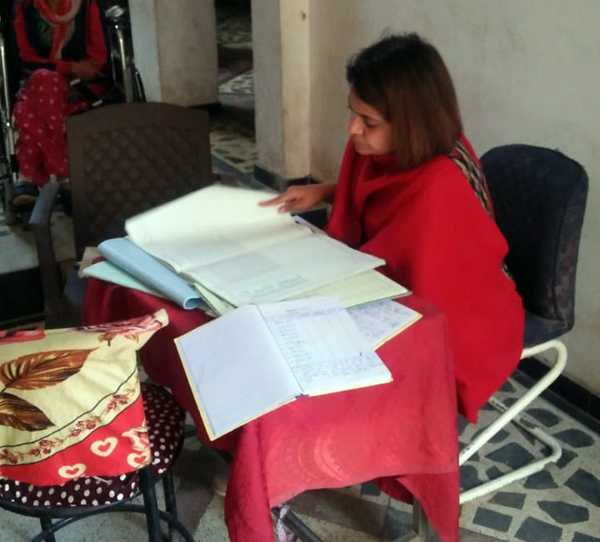 DLSA secretary inspecting documents at the deaf and dumb girls hostel in Udaipur on Monday.

Udaipur : The District Legal Service Authority (DLSA) found a plethora of irregularities at a hostel for the deaf and dumb girls located at Thoor in Udaipur, which led the judicial officer to recommend shut down of the institution in the inspection report.  Maa Lakshmi deaf and dumb girls hostel, run by Divyansh Sansthan, an NGO Madhuban run by Preeti Jain, a former chairperson of the child welfare committee. The DLSA secretary Riddhima Sharma and team made a sudden inspection of the hostel on Monday and found many irregularities and girls living in unhygienic conditions.

The team was surprised to find five blank sealed  forms that had had been signed and issued by two former members of the CWC which did not contain any names. Such form 18, were issued only by the CWC for children in urgent need for care and protection. Twenty six girls were found admitted in the unit having a capacity of 50, which is aided by the social welfare department. The unit had various sanctioned posts including a clerk, warden, supervisor, cook, caretaker, sweeper, vocational instructor, computer operator, part time nurse, physiotherapist and a trained teacher , however, during inspection only the warden was present in the hostel while none of the other staff was there.

The warden was physically disabled and the inmates were put to her service to be taken around in a wheel chair, it was seen. The other staff had been irregular for months however, they had been claiming payments on regular basis. A sum of 56 thousand rupees was being spent on salary of the staff. The inmates with speech and hearing impairment were not send to special schools as per the norms, they were admitted in the nearby government school, the warden told the team.

“The rooms were found to be in a pathetic condition, beds had a strong stink. There was not even a holder for light inside the washroom that was used by the hostel inmates” Sharma said.  The children were given inadequate food, they were not given lunch boxes to be taken to school. On the day of inspection, it was found that only half kilogram of cauliflower had been cooked to serve 26 inmates. The team also found two registers being maintained at the unit. The rough register had the details of actual expenditure on grocery purchased for the inmates which amounted to some 3 to 4 thousand each month while in another register the expenditure shown per month was between 17 to 18 thousand rupees.

The bills of the provision store did not have any dates and it was evident that it was prepared for the sake of claiming bogus payment from the government. Against the actual expense of 3 lakh 50 thousand in the year 2018-19, fake expenditure of 17 lakh, 51 thousand rupees had been shown in the official register. The DLSA secretary in her report recommended inquiry to be made against the hostel management as well as legal action against former CWC members and the grocery seller for raising fake bills.