The Border Security Force (BSF) is celebrating its 56thRaising Day today. On this occasion, Union Minister of State for Home Affairs, Nityanand Rai took the salute of the BSF Raising Day Parade-2020 held at the Chhawla Camp here today. The programme was attended by the Chief of DefenceStaff,General Bipin Rawat, BSF Director General Rakesh Asthana, senior officers of Central Armed Police Forces and the Police and other dignitaries. 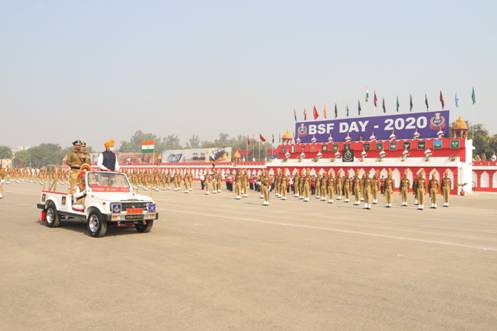 The Minister of Statepaid homage to the immortal border guards at the martyrs’ memorial of BSF. He presented the ‘Police Medal for Gallantry’ and ‘President’s Police Medal for Distinguished Service’ to BSF personnel. Nityanand Rai also released the BSF’s annual e-magazine “Borderman”. 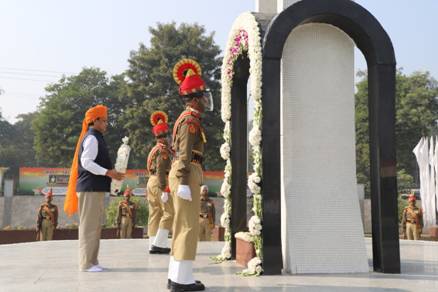 In his address, the Union Minister of State for Home Affairs said the brave personnel of the BSF are protecting the borders of the country with full vigour, despite tough terrain and adverse conditions. Saluting the supreme sacrifice and indomitable gallantry ofBSF Jawans in the line of duty, Nityananda Rai said that because of them, every citizen of the country is contributing to national development work without fear. Rai said the Prime Minister Narendra Modi has trust in the security forces and the Union Home Minister Amit Shah has faith in you, which you have maintained, and the nation is proud of you. 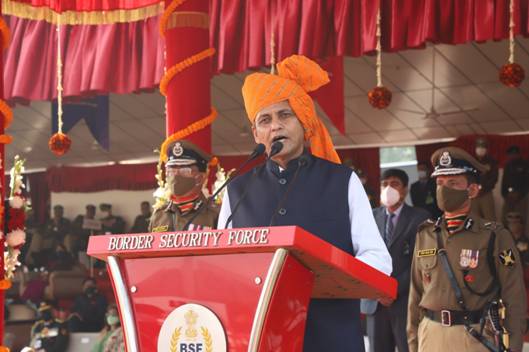 Referring to the BSF’s Artillery Wingwhich is celebrating its Golden Jubilee year, the Minister of Statesaid he is confident that the Artillery Wing will achieve new heights by carrying forward its glorious history. Lauding the women contingent participating in the parade, Rai said that it is reassuring to see the increasing participation of women power in the security of the country,and the women sentinels of the force are realizing the Prime Minister’s commitment in this regard. The Minister of Statesaid that the conspiracy to harm the country through cross-border terrorist infiltration and drug trafficking, is being thwarted by BSF Jawans with a proper response. Appreciating the work done by the Border Security Force in the period of the Corona pandemic, the Minister of Statesaid that BSF personnel were also infected by the virus during this period, but they did not lose their spirit. Rai said that every challenge faced by the Border Security Force and its solution is a priority before the government. Under the able leadership of Prime Minister Narendra Modi and the Union Home Minister Amit Shah, the Central Government is taking full care of the Jawans and their families and the entire nation stands with you.

On this occasion, Director General, BSF Rakesh Asthana gave details about the BSF’s achievements, new initiatives and preparations to deal with future challenges, while giving an assurance about the security and integrity of the country’s borders.

The BSF is the world’s largest border guarding force securing the 6,386.36 kms long International Borderswith Pakistan and Bangladesh. On the occasion of its Raising Day, the Border Security Force reiterates its commitment to the nation and its motto ‘lifelong duty’.