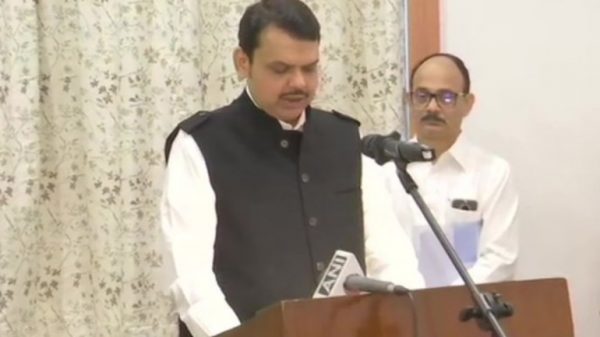 MUMBAI:  In a surprise move, BJP’s Devendra Fadnavis took oath as the Maharashtra Chief Minister for a second term at Raj Bhavan this morning more than a week after the state was placed under President’s Rule. Nationalist Conference Party chief Sharad Pawar’s nephew, Ajit Pawar, will be his deputy.

The move comes at a time when deliberations between the Congress, the NCP and Shiv Sena to form a government in the state reached the final stage on Friday and the three parties inched closer to announce an alliance.

“The BJP wanted to give a stable government to the people of Maharashtra,” Mr Fadnavis said after taking oath, adding that his party’s ally Shiv Sena “did not follow people’s mandate”. “I thank the NCP coming in support to form this government. We all know that there was President’s rule for the last few days… Shiv Sena did not follow the mandate,” he said.

In a tweet this morning, Prime Minister Narendra Modi congratulated Mr Fadnavis and Mr Pawar. “Congratulations to @Dev_Fadnavis Ji and @AjitPawarSpeaks Ji on taking oath as the CM and Deputy CM of Maharashtra respectively. I am confident they will work diligently for the bright future of Maharashtra,” he wrote.

SAI to arrange for travel for trainees to return to various training centres, as training begins to resume across the country