The outbreak of Nipah virus in Kerala has so far claimed at least ten lives while two persons are still in critical condition.

Union Health Minister JP Nadda is closely monitoring the situation. He has directed for all support to be extended to Kerala in its prevention and management. Following which, a multi-disciplinary Central team from National Centre for Disease Control is presently in Kerala constantly reviewing the situation. He has also urged citizens not to believe in rumors posted on social media and not to spread panic.

With early and efficient containment measures undertaken jointly by the Ministry of Health & Family Welfare and Government of Kerala, the outbreak is unlikely to spread. The Virus Research Diagnostic Laboratory at Manipal Hospital and the National Institute of Virology are geared up to meet any diagnostic challenges that may arise.

Maharashtra Health Minister Deepak Sawant has made an appeal to the citizens not to panic over Nipah virus. The Maharashtra Government Hospitals are all geared up to tackle it. He said, people with symptoms will be kept in intensive care and isolation.

Nipah Virus was first identified in Malaysia and Singapore in 1998. At that time, it was primarily caused in pigs and through them got transferred to humans. A report on precautions one should take to avoid the deadly virus.

The outbreak of Nipah virus has resulted in casualties in the state of Kerala, while several people with symptoms are undergoing treatment in various places in the state. This is the first detection in Kerala of the Nipah virus which has a high fatality rate and spreads mainly through bats, pigs and other animals.

According to the World Health Organization, Nipah virus or NiV infection is a newly emerging zoonosis that causes severe disease in both animals and humans. The natural host of the Nipah virus is the fruit bat. It probably spread to humans after they came in contact with pig feces and excretions. The worrying aspect is the ability to virus to spread from one human being to another without direct interaction with primary host.

Some common signs and symptoms of Nipah virus are headache, fever, nausea, dizziness, drowsiness and mental issues such as confusion. These symptoms can last up to 7-10 days.

As of now, there is no particular vaccine available for the treatment of Nipah Virus. The only way to treat this virus is through intensive supportive care. Complete quarantine of the cases is also essential to check the spread of virus. 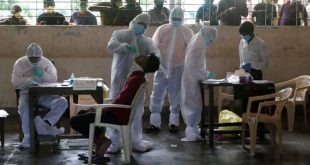 Steps to Boost The Growth of Industries

Promotion of industries is a continuous and ongoing effort of the Government. Government has taken …