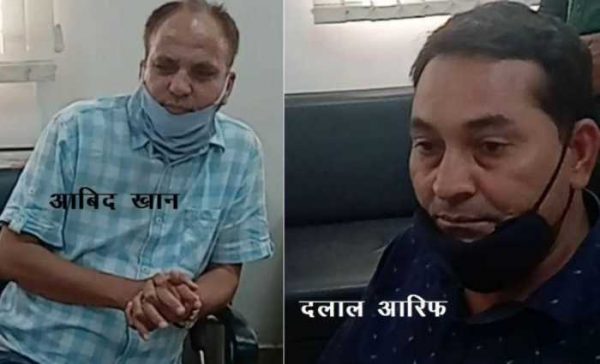 Udaipur : A special team of the Anti Corruption Bureau, Jaipur on Friday, arrested a financial advisor of the Udaipur Smart City Limited, for taking Rs 2 Lakh bribe, through his agent, from a contractor against passing payment bills that were pending for some months. Abid Khan, the advisor and his agent Arif, both were arrested from the USCL office situated in the Udaipur Municipal Corporation campus in the afternoon. A day ago, the duo had taken 1 lakh rupees from the contractor, which was seized by the ACB sleuths in a raid from the accused’s flat in an apartment in Bhuwana area of the city.

Additional SP Sanjeev Nayan led the special team which conducted the trap at the instructions from ACB, DG Alok Tripathi and ADG Dinesh MN. The main accused reportedly hails from Jhalawar who has a house in Kota and hence the local teams held searches in the corresponding places too. ” In a search from his Kota house, the team found documents of a plot, five bank accounts and some minor fixed deposits, investigation is underway ” Thakur ChandraSheel, ASP Kota informed.

” The contractor Pravin had given a complaint to the ACB, headquarters at Jaipur, against the financial advisor stating that the latter had been in practise of demanding money from him in lieu of clearing his payments for works related to the Smart City Project. Pravin had the tender for man power supply and maintenance of vehicles used in garbage collection from various parts of the city. His bills had been due and the accused demanded 3 lakh rupees for clearing those bills” Sanjeev Nayan told the media.

On Friday when the complainant went to the USCL office to give the bribe money, the accused called the agent who received the money from the contractor and gave it to him. The role of the accused’s peon in the entire bribe episode is also being investigated, the officer said. Meanwhile, sources informed that the contractor was regularly bullied by the accused with unethical claims for money ever since he bagged the tender and the latter even threatened of cancelling the tender, if his demands were not fulfilled.