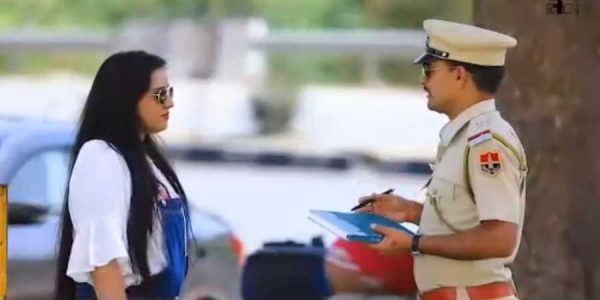 Udaipur : A simple romantic gesture picturised during his pre-wedding shoot, wherein he is seen in the Khaki uniform, has landed a police officer in trouble in Udaipur district. The cop is seen accepting money from a girl (now his wife) who violated the traffic rule by not wearing a helmet while riding. The video has apparently disappointed some persons who perceived it as a negative portrayal of the uniform.

On complaint from a fellow cop, senior officials have taken the incident seriously and issued instructions to all Inspector Generals across the state to upkeep the code of conduct of police uniform and ban its use on similar kinds of shootings. ” We will examine the clip and if the SHO is the person who enacted the scene, an explanation would be called and disciplinary action would be taken. Wearing a Khaki uniform is a matter of pride and dignity and nothing which depicts it in a grey shade, is tolerable” Udaipur SP KailashChandra Bishnoi told Udaipur Kiran.

Going with the latest trend, Dhanpat Singh,a Sub inspector, presently posted as SHO , Kotra police station in Udaipur district,too had a pre-wedding video shooting done two months ago. The script had been such wherein the real life cop is seen in the role of a policeman in reel too. The video sequence shows a girl ( the SHO’s wife now) riding on a scooter without wearing a helmet. She is stopped by a policeman and taken to the SHO. The girl drops a currency note in his pocket smilingly and pickpocket his wallet. The girl meets the SHO again on the pretext to return his wallet and the couple are shown fallen in love against the backdrop of bollywood songs.

The shooting is told to have been held some two months ago at the time of the cop’s marriage, however, an SHO posted at Mandphiya police station, Chittorgarh apprised  Dr. Hawa Singh Ghumariya, IG (Law and Order) about the video. In a letter dated August 20, sent to all the range IGs, Ghumariya stated the video shoot as ‘unfortunate’ also creating a negative image for the police department. Further usage of the police uniform for similar shoots be banned completely and proper legal action be taken, the letter read.