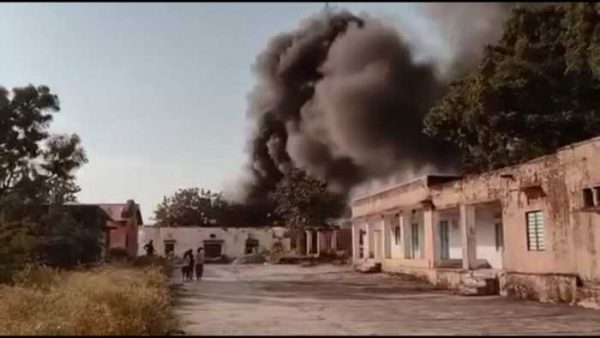 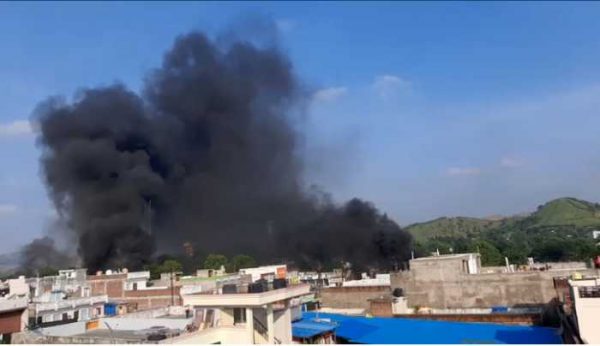 Udaipur : Tension prevailed for the second consecutive day on NH-8 at Kankri Doongri on a stretch of some 10 kilometers between Bicchiwada (Dungarpur) and Kherwada (Udaipur) on Friday as tribal youths fought pitched battles with the police and set ablaze several vehicles. Mobs attacked highway hotels, restaurants and even petrol pumps.  They got control over a passing truck and some men got over it. The protestors pelted stones from the truck at the cops who had to retreat to save their lives.

Youths raised slogans demanding ‘Azadi’ and rights. Scores of policemen and protestors were injured in the violence that spread from Dungarpur and reached Udaipur borders. Police opened fire, burst tear gas shells and lathi charged mobs that targeted highway hotels and restaurants, pelted stones and damaged the public property. The Internet service has been suspended for 24 hours in the entire Dungarpur district while in Udaipur, on the Collector’s advice, the divisional commissioner issued an order to suspend internet services in Kherwada block too later afternoon.

Looking at the situation, police completely stopped commutation on the Udaipur- Ahmedabad highway. Cars. buses and trucks made a bee line at both the sides waiting for police clearance for traffic movement. Vehicles were not allowed to take the Highway route and asked to wait near the roadsides until a diversion was not specified. Additional forces, MBC and RAC battalions were pressed in services while teams from Udaipur too were sent to hold the tensed situation that intensified on the second day.

On Friday, five to eight kilometers of the stretch was besieged by the protestors who put up blockades, burnt tyres and rained stones on cops who tried to stop them. The mobs attacked a hotel and pelted stones at the window panes and set ablaze many vehicles parked in the premises. Udaipur IG Binita Thakur supervised the police action in the area while Dungarpur collector Kanaram and SP Jai Yadav have been camping in the area and trying to pacify the agitators. More than 40 vehicles including the Dungarpur SP’s jeep and two other police vehicles have been torched by the mobs in two days On Friday noon, a luxury bus was put on fire at Kherwara.

An uncontrollable mob laid late night attack on some shops and a residential colony in Kher wada town . Youths tried to break open a house in Shreenath colony but they were driven out by the cops. They looted two of some 10 shops here. Horror struck residents went to the police station seeking protection where cops expressed helplessness . People met the MLA Dayaram Parmar at 10.30 pm and urged him to take stringent action to curb the protest.

On Friday afternoon, the agitators rampaged through Kherwada town and looted highway shops. They forcibly entered inside a liquor shop and damaged alcohol bottles. Some of the men got inside hotels and shops, thrashed innocent people. They put 3 buses on fire here. Police teams have been camping outside the Kherwada police station to prevent miscreants enter inside the settlement.

A delegation was sent by Dungarpur district administration to hold peace talks with the agitators however, things appeared uncontrollable and the protestors were not ready to listen. The delegation consisting of 10 members including Ex MLA Devendra Katara, former Pradhan Laxman Koted,  Marxist leader Gautam Damor, Ex sarpanch Sukhlal Ahari went to Kankri Doongri and initiated peace talks with the youth leaders but they stuck to their demands and refused to withdraw unless their demands were met,they said.