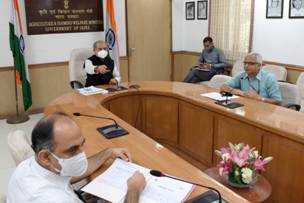 The SVAMITVA Framework developed by the Ministry of Panchayati Raj provides a detailed roadmap and guidelines for the various States in terms of the Scheme objectives, coverage, various components involved, year-wise funding pattern, survey approach and methodology, stakeholders involved and their roles and responsibility, monitoring and evaluation, and deliverables.

Coffee Table Book on SVAMITVA Scheme is an effort to condense the vast efforts of various stakeholders involved in the implementation of the Scheme, learnings and best practices that have emerged during the course, glimpses of various challenges and success stories and provide a way forward.

The Minister was also updated that property cards have been distributed in more than 7400 villages and more than 7,00,000 beneficiaries have been benefited from the Scheme across the country. The scheme will benefit rural residents by providing them with property cards that can be used for taking loans and the creation of accurate land records for rural planning.

Tomar praised the support provided by various stakeholders and society at large despite the pandemic for the successful implementation of the scheme. It has been seen that beneficiaries have also started to reap benefits of the Scheme and many have availed of bank loans and other financial benefits to construct houses or expand businesses.

SVAMITVA, a Central Sector Scheme of the Ministry of Panchayati Raj was nationally launched by the Prime Minister on the occasion of National Panchayati Raj Day on 24th April 2021 after successful completion of the pilot phase of the Scheme in 9 States. SVAMITVA Scheme aims to provide property rights to the residents of rural inhabited areas in India by using Drone survey and CORS Networks which provides mapping accuracy of 5 cms.