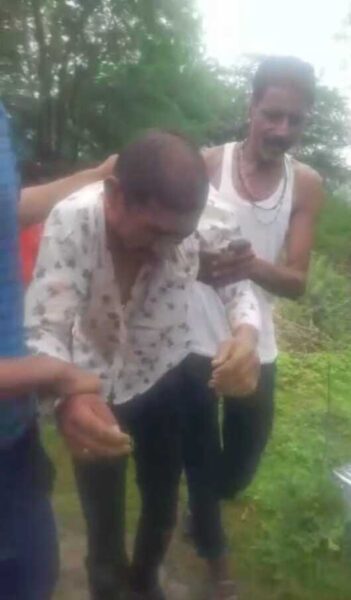 Udaipur : Residents thrashed , paraded a man on the streets and took him to the police station for molesting a woman in Nandvel village of Bhinder panchayat samiti of Vallabhnagar block.

The incident took place on Saturday morning near the village on the Udaipur-Chittorgarh highway when the accused Narendra Singh Rajput saw a woman returning from the field.

Seeing no one nearby, he took advantage of the situation and caught her. He tried to assault her but the woman  started  shouting. Some people heard her voice and ran to rescue.

The villagers nabbed the accused and thrashed him badly while the woman, too, beat him with her chappals.

The incident was videographed which went viral on social media showing the residents parading the man on the street to the police station. A complaint has been taken and investigation is underway, police said.