Union Minister for Minority Affairs Mukhtar Abbas Naqvi today said at Lucknow  that our constitutional federal system of governance is the guarantee of “Unity in Diversity”. 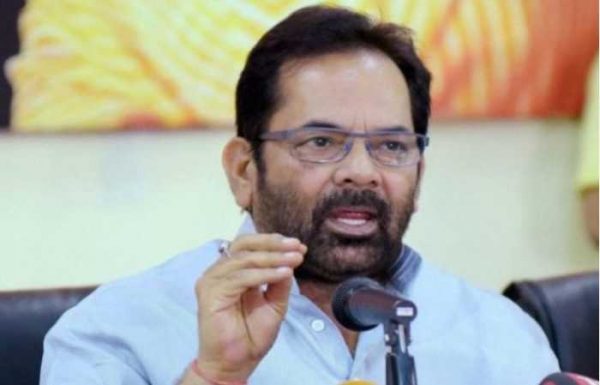 While speaking on the topic of “Enhancing Focus of Legislators on Legislative Business” at the 7th Conference of CPA India Region at Vidhan Bhawan, Lucknow today, Naqvi said that while on one hand in our Constitution; the Article 105 ensures powers and privileges of the Parliament and Assemblies, on the other hand the Article 51A talks about the Fundamental Duties of the Indian Citizens.

The Article 105 says- Powers, privileges, etc of the Houses of Parliament and of the members and committees thereof

(1) Subject to the provisions of this constitution and the rules and standing orders regulating the procedure of Parliament, there shall be freedom of speech in Parliament

(3) In other respects, the powers, privileges and immunities of each House of Parliament, and of the members and the committees of each House, shall be such as may from time to time be defined by Parliament by law, and, until so defined shall be those of that House and of its members and committees immediately before the coming into force of Section 15 of the Constitution (Forty fourth Amendment) Act 1978

Naqvi said that the Article 51A of the Indian Constitution has made it clear the Fundamental Duties of the citizen of the country. It says- It shall be the duty of every citizen of India

(a) to abide by the Constitution and respect its ideals and institutions, the national Flag and the National Anthem;

(b) to cherish and follow the noble ideals which inspired our national struggle for freedom;

(c) to uphold and protect the sovereignty, unity and integrity of India;

(d) to defend the country and render national service when called upon to do so;

(e) to promote harmony and the spirit of common brotherhood amongst all the people of India transcending religious, linguistic and regional or sectional diversities; to renounce practices derogatory to the dignity of women;

(f) to value and preserve the rich heritage of our composite culture;

(g) to protect and improve the natural environment including forests, lakes, rivers and wild life, and to have compassion for living creatures;

(h) to develop the scientific temper, humanism and the spirit of inquiry and reform;

(i) to safeguard public property and to abjure violence;

(j) to strive towards excellence in all spheres of individual and collective activity so that the nation constantly rises to higher levels of endeavour and achievement;

(k) who is a parent or guardian to provide opportunities for education to his child or, as the case may be, ward between the age of six and fourteen years.

The Minister also  said that a proper environment for enjoying rights will be created if every citizen performs her duties. The people’s representatives should set an example for the common people in this regard. Our country has emerged not only as the largest democracy but also as a glowing symbol of a vibrant, pluralistic culture with the flourishing parliamentary system, with the Constitution acting as the guarantee of protecting the rights of every society.

Naqvi added that the Rights and Fundamental Duties of citizens are equally important. Rights and Responsibilities are two sides of the same coin and both go together. If we have rights, we also have some responsibilities attached to those rights. Wherever we are living, whether it is at home, society, village, state or country, rights and responsibilities go with us together.

As a good citizen of the country, he exhorted that need to know and learn our rights and duties and make them an essential part of the life for the welfare of society and the country. If life can be changed through individual actions, then why the collective efforts made in the society cannot bring positive effects in the country and the whole society? Therefore, fulfill the Fundamental Duties is necessary for the prosperity and peace of the society and the entire country.

Naqvi said that while choosing an apt form of government for the newly independent India, the Forefathers preferred to choose Parliamentary Democracy, thereby, making the Government of the day accountable to its electorate. The Mantra of this accountability is “Fundal Rights and Fundamental Duties. In this set up, Legislatures have become the instruments of voicing public opinions and concern, raised by the members inside the Chamber on behalf of their constituents and representing their interests in all their diversity. Besides, in order to pass effective laws, the Legislatures need time, energy, information and thought on the part of its members, i.e. the Legislators. It is in this context that focus and capacity building of Legislators on the legislative business become of paramount importance in the success of a parliamentary democracy.

He further said that Legislative Orientation is one of the most important mechanisms through which the Legislators, particularly the first time elected get acquainted with parliamentary procedures and practices and with the working of the Institution including conventions, etiquettes and traditions. In this context, I would like to quote Late Arun Jaitley when he said, “(Politics) influences the life of a nation and, therefore, the stature of the men who man this system, must always measure up to the responsibility that the country vests in them.” Orientation helps the Legislators to be aware of this responsibility vested in them by the people.

Naqvi also stated  that in this context, it is noteworthy to mention that in Lok Sabha, the Parliamentary Research and Training Institute for Democracies (PRIDE) has been successfully conducting Orientation Programmes for the newly elected members of the Parliament. During the Orientation Programmes, eminent parliamentarians, senior parliamentary officials and experts interact with the newly elected members on various aspects of the working of our parliamentary institutions. The discussion sessions are interactive in nature, members can freely exchange views with the Faculty who share their experiences and ideas.

The Minister underlined that as we all know, the Legislators are primarily required to engage in lawmaking and therefore, they must be able to identify a policy issue, potential legislative options to address that issue, consult relevant stakeholders relating to the issue and select a preferred option after deliberating over available options. This assessment and deliberation can occur only when the Legislators are briefed adequately on the legislations proposed to be passed. In this direction, the Briefing Sessions on Legislative Business of the Legislature are of very high importance to enhance focus of legislators on legislative business. Here, I would like to share with the Hon’ble Presiding Officers about our experience on Briefing Sessions on important Legislative Business, which we have recently initiated in the Lok Sabha. Aimed at improving awareness of our members on the legislative issues before the House, these Sessions acquainted Members with impact analysis of the proposed legislative options. And I am happy to place on record that I have received positive feedback from the members on this initiative of ours.

Naqvi said that apart from law-making, ensuring the accountability of Executive is also one of the core-functions of the Legislature. The Parliament of India does so by constituting Department Related Standing Committees, which examine implementation of various policies by the Government, among others. To perform these legislative functions, it is imperative that Legislators have access to sector-specific research support. Services of the Research Service of the Legislature must be explored to complement the information received from the Executive. Presence of informed legislators in Committees also ensures that good policy legislations get to the floor of legislature for passage, which leads to passage of socially and politically relevant laws suited for meeting the needs of this ever-evolving society.

Naqvi informed  that in the USA, the Congressional Research Service (CRS) works exclusively for the United States Congress, providing policy and legal analysis to committees and Members of both the House and Senate, regardless of party affiliation.

Naqvi said that Legislatures in India have played a significant role in the transformation of the nation by enacting various socially relevant legislations in its tryst with destiny for the last seven decades. However, various challenges, on account of political, social, economic and technological advancements, stand in the success of parliamentary democracy in India which can only be tackled if the legislators are focused and equipped with latest information on subjects of legislative importance. Ability to retain and use this information in legislative business will only lead towards effective functioning of our parliamentary institutions.