Addressing the gathering, the Union Minister of Agriculture and Farmers’ Welfare, Narendra Singh Tomar said that the entire North East due to difficult terrain is lagging behind and all Ministries including Agriculture Ministry are working towards ensuring a progressive North East. He said that this lag needs to be removed and can only be done through a comprehensive vision along with stable policy planning and balanced growth across the region as envisioned by Prime Minister Narendra Modi.

India currently imports 4,000 tonnes of Kiwis from New Zealand, Italy and Chile. Tomar said that to strengthen Prime Minister Narendra Modi’s vision and mission of creating an Atmanirbhar Bharat, the Ministry of Agriculture is trying to provide handholding support to Kiwi farmers across the country. This is also in line with the call of ‘Vocal for Local’ which will help in reducing dependence on imports and building a sustainable market for locally produced Kiwi fruit variants.

The Union Agriculture Minister further said that the entire nation is witness that Prime Minister Narendra Modi has focused on Agriculture and allied sector rights for the beginning and his leadership has guided all to look threadbare and in-depth into all aspects of Agriculture especially the gaps which need to be filled in order to ensure that farmers can reap the benefits of their toil. He said that a new chapter is being introduced in the Agricultural history of Nagaland which will be highly beneficial to the Kiwi farmers of the State. He said that this programme of Kiwi Production enhancement will prove to be a milestone in the years to come. 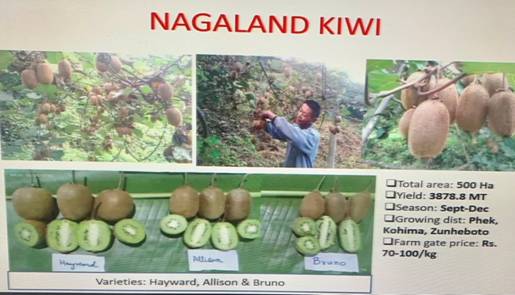 Tomar said also elaborated on the problems faced by the farmers in the North East region namely lack of good planting material, productivity issues, lack of packaging facilities and marketing networks for farmers. Considering the problems faced, he said that Centre is working hand in hand with State Governments and especially the Central Institute of Horticulture, Nagaland and the Department of Agriculture and Farmers’s Welfare has taken key steps to ensure proper training and capacity building of farmers in production as well as packaging of kiwi products is done. The Government is also ensuring that farmers are connected to the market so that they can reap a fair price for their produce. The institute in Nagaland has also conducted training and exposure visit of farmers from Phek District of Nagaland for helping them understand how to reap good returns through Kiwi production. Tomar added that persistent efforts should be made by all to ensure Nagaland can emerge as the ‘Kiwi State’ of India.