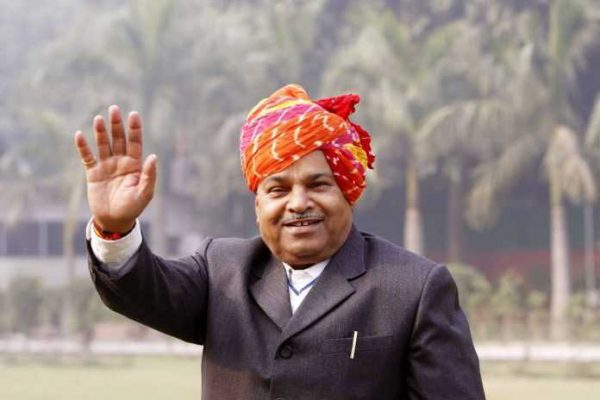 Thaawarchand Gehlot, Union Minister for Social Justice and Empowerment e-inaugurated the inaugural Camp for free distribution of Aid & Assistive devices at Block level among the identified divyangjans under ADIP Scheme and to Senior citizens under Rashtriya Vayo Yojana of Government of India organized at Lohiya Kala Bhavan, Siddharth Nagar, Uttar Pradesh through virtual mode today. Shyam Dhani Rahi, MLA, Kapilavastu, Siddharth Nagar Sadar was also present on the occasion. The camp was organized by ALIMCO under DEPwD, Ministry of Social Justice and Empowerment (MoSJE), Government of India in association with Social Welfare Department and District administration, Siddharth Nagar. It was conducted as per new approved Standard Operating Procedure (SOP) issued by Ministry in wake of COVID 19 pandemic.

Distribution of Motorized Tricycle of worth Rs. 39.35 Lakhs was done among 107 number of Divyang beneficiaries. These motorized tricycles were distributed with support of Rs.12 Lakh 84 Thousand from MP Local Area Development fund of Member of Parliament, Dumariyaganj Jagdambika Pal. Different categories of assistive devices were also distributed to Senior citizens which include Wheel Chair, Hearing Aid, Denture and Spectacles etc.

Addressing on the occasion Thaawarchand Gehlot said that in the leadership and guidance of the Prime Minister, M/o Social Justice and Empowerment has been able to implement new Act for persons with disabilities to empower Divyangjan. Looking at the interest towards the sports among the Divyangjan of the country and their good performance in Paralympics, the Ministry has decided to establish ’Divyangta Khel Kendra’ in Gwalior (M.P). The Union Minister also informed that the Ministry is also establishing National Mental Health Rehabilitation Center in Sehore, Madhya Pradesh. Work on both the projects has been started by CPWD, he informed.

A Total 2186 number of beneficiaries of Siddharth Nagar District will be provided with 4330 number of assistive appliances of different category valuing worth of Rs. 193.97 Lakhs.These assistive devices will be distributed among the beneficiaries by organizing a series of distribution camps at block level. Among the total 2186 beneficiaries, 1418 are Divyangjan and 768 are Senior Citizens. The identification and registration of beneficiaries was done during the assessment camps conducted by ALIMCO last year.

Total number of Aids and Appliances which are going to be distributed in different blocks include  779 Tricycle, 286 Wheel Chair, 01C.P Chair, 874 Crutches, 800 Walking Sticks, 17 Rollator, 36 Smart Cane, 47 Standard Folding Cane, 11 Smart Phone,  08 Daisy Player for visually impaired, 505 Hearing Aid, 15 MSIED Kit for Intellectually Impaired , 185 Calipers & Artificial limbs. Apart from this, other items like 18 Tetrapod/Tripod & Walker, 341 Spectacles, 293 for senior citizens will be distributed in a series of camps to be conducted at various locations.