Washington : A fortnight after the meeting between Prime Minister Narendra Modi and US President Joe Biden, the White House has said that the focus is now on continuing to move forward on a range of issues by senior level officials from both India and America. 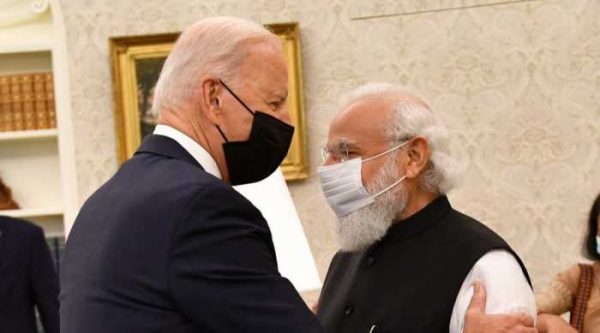 “At this point, the focus is going to be on continuing to work through high-level interlocutors, whether it”s the Secretary of State and the leaders at the State Department, or leaders from our national security team about how we can continue to move forward on a range of issues, whether it”s economic security, physical national security, addressing Covid, and getting the pandemic under control,” White House Press Secretary Jen Psaki told reporters at her daily news conference on Friday.

“So, that work will continue at lower than the leader level, but still high levels in the weeks and months ahead,” Psaki said responding to a question on the India-US relationship.

In less than a fortnight after the Modi-Biden in-person bilateral meeting, there has been a flurry of high-level visits between the two countries and several Cabinet-level visits are in the pipeline in the next few weeks.

Prominent among them include, the US visit of Chief of Defence Staff General Bipin Rawat and India visit of the Deputy Secretary of State Windy Sherman.

On Friday, the two countries held their 16th Defence Policy Group meeting and the Pentagon announced the visit of the US Chief of Naval Staff to India next week.

Union Finance Minister Nirmala Sitharaman is scheduled to travel to the US, possibly next week.

And, Defence Minister Rajnath Singh, along with External Affairs Minister S Jaishankar, is likely to travel to Washington DC in November for the next round of 2+2 meeting to be hosted by their American counterparts Defense Secretary Lloyd Austin and Secretary of State Tony Blinken.

On September 24, Biden had hosted Modi for a 90-minute bilateral meeting in his Oval Office of the White House. Since then, there has been a sudden acceleration in the activities related to the India-US relationship, including some of the key areas like climate change, defence, Indo-Pacific and Afghanistan.