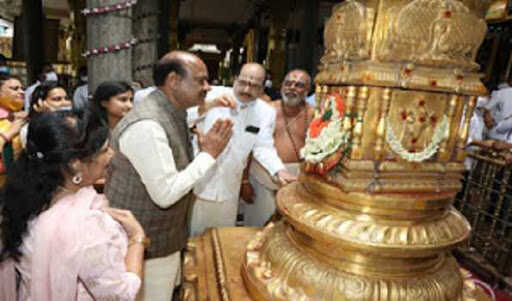 Tirupati : Lok Sabha Speaker Om Birla offered prayers at the ancient hill shrine of Lord Venkateswara at Tirumala here on Tuesday. Om Birla with his family members arrived on the Holy Hills on Monday evening on a two day maiden spiritual visit and after an overnight halt on the hills, he paid his obeisance to Lord Venkateswara this morning, a temple official told PTI Upon his arrival at the hill temple, the Lok Sabha speaker was accorded a warm welcome by TTD Board Chairman YV Subba Reddy, Executive Officer KS Jawahar Reddy and Additional Executive Officer A Venkata Dharma Reddy.