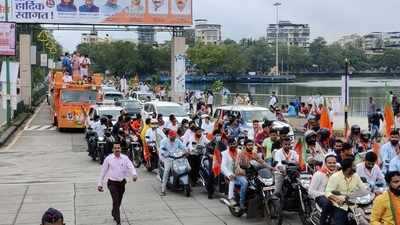 Thane : Police have registered an FIR against the organisers of an event during the ”Jan Ashirwad Yatra” of Union minister Kapil Patil for alleged violation of COVID-19 norms, an official said on Wednesday.

As part of tours by some newly-inducted Union ministers in different parts of Maharashtra to reach out to people, MoS for Panchayati Raj and Bhiwandi MP Kapil Patil on Monday joined the yatra in Thane where hundreds of BJP activists welcomed him, while members of the Agri and Koli communities danced and sang songs.

In one of the events during the yatra, the organisers put up a stage where BJP activists allegedly gathered in a large number without wearing masks or maintaining social distance, an official from Kopri police station in Thane said. They had also not taken permission from police for the event, he said.

The Kopri police on Monday night registered an FIR against two corporators and two other local functionaries of the BJP under Indian Penal Code Sections 188 (disobedience to order duly promulgated by public servant), 269, 270 (negligent, malignant acts likely to spread infection of disease dangerous to life) and provisions of the Epidemic Diseases Act. No arrest has been made so far, the police said. One person was also allegedly robbed of Rs one lakh during the event, they said.