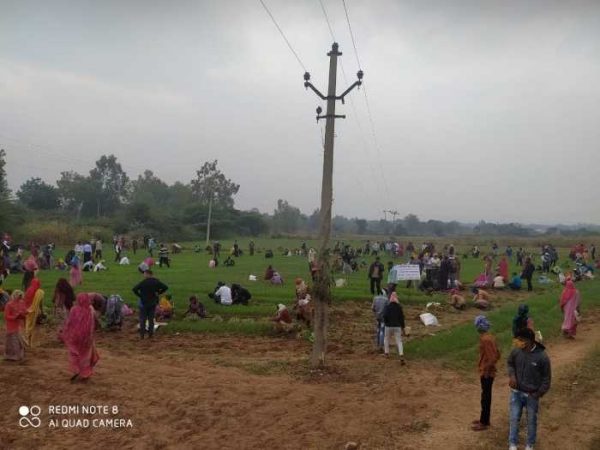 Udaipur : Anticipating limited stock of the onion plants that were put on sale at Krishi Vigyan Kendra in Faloj under Dovda police station limits of Dungarpur District, hundreds of villagers who had gathered to purchase, uprooted them from the field and went away. Before the KVK staff could understand anything or stop the villagers,the plants had been plucked.

A police complaint has been given against some 200 unidentified persons by the KVK incharge. However, the scientists and the police believe the act was unintentional and not done with a motive of loot. “We have received the complaint and miscommunication seems to be the reason behind the act. The villagers didnt come with the intention to loot. An investigation  is underway, we will clarity on the policies of the KVK regarding plant sale” KaluRam Ravat, Dungarpur SP told Udaipur Kiran.

According to sources, the KVK scientists had grown AgriFoundLight Red (AFLR) variety on onion seedlings for the Rabi season. The seedlings were meant for sale to the local farmers on yard basis i.e some 600 to 750 seedlings were sold in a size of 3×3 feet yard. Farmers were invited to the farm for purchase however, the number exceeded than expectations.

“Hundreds of people walked in and we had to maintain the corona protocol of social distancing. We asked them to wait in a queue and stand in a distance but they were apprehensive that they would not get the seedlings. Some of the people went inside the field and started plucking while others too followed them” BL Roat, a scientist at the farm informed. Meanwhile, SL Mundra, Director Extension, Maharana Pratap University for Agriculture and Technology termed the incident unfortunate.

“Our scientists and team work day and night to develop high yield varieties and this AFLR variety is very beneficial for the farmers as it gives good returns. Last year too the farmers who grew this variety made good profits. This is first time that people grew impatient and plucked away the plants. An enquiry would be held and we will take measures so that such thing does not happen again” Mundra said.