India International Science Festival (IISF) 2020 is going to be organized during 22-25 December 2020 on virtual platform. This is the largest science festival on virtual platform. The central theme of this year’s IISF is “Science for self-reliance India and Global Welfare”. This year, 41 events will be organized under 9 verticals. IISF 2020 will also endeavour to send the entries of Guinness World Records in five different categories. On 1st December 2020, the organizing institute of the IISF 2020, CSIR-National Institute of Science, Technology and Development Studies (NISTADS) organized the Curtain Raiser ceremony along with CSIR-National Institute of Science Communication and Information Resources (NISCAIR). Dr. Vijay P. Bhatkar, President, VijnanaBharati (VIBHA),in his address as the Chief Guest, emphasized the need to communicate science in regional languages, and said that India is a diverse country and it has diversity of languages, culture, religions and so on. He added that the IISF should also be known for linguistic diversity and cultural diversity of science. The caravan of IISF is growing and we believe that we will accomplish the challenge of reaching every section of society, he said.

ShriJayantSahasrabudhe, National Organising Secretary, VijnanaBharati also addressed the event and said that by enjoy science as a festival, we can understand it well. “There are more than 40 events planned. I hope, people will not only understand it but also try to adopt science as an essential part of their lives,” he said.

While speaking at the curtain raiser, the Chief Coordinator of the IISF 2020 and Director, CSIR-NISTADS and CSIR-NISCAIR, Dr.RanjanaAggarwal said that the first IISF started in the year 2015 and from there onwards it has come a long way. “The variety of programs in the IISF-2020 will give an opportunity to everyone to show their talent apart from school and college students,” she said. 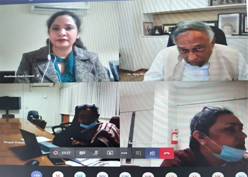 One of the most awaited events of IISF, the Guinness World Record, will have five events. It includes virtual science festival that will run on all five days and approximately 2,000 participants are expected to be part of it per day at peak hour. Light, Shadow and Time Device Making record would be attempted on 22nd December by 5,000 students. On 23rd December around 30,000 students will attempt Online Hand Hygiene Lesson and Activity. The fourth event will be held on 24th December where around 30,000 students will attempt the record of applying protective masks and taking an oath online. The last day of the program will witness 35,000 students who will take a lesson on nutrition and health.

Dr.Vipan Kumar, Coordinator, Organising Committee, IISF 2020 welcomed all the dignitaries of the curtain raiser event. Dr. Monika Jaggi, Senior Scientist, CSIR-NISCAIR presented detailed information about the International Science Literature Festival-VIGYANIKA which will be organized during 22-24 Dec. 2020 as one of the prominent events of IISF 2020. Dr. SandhyaWakdikar, Coordinator, IISF 2020 Publicity Team elaborated on the events, schedule, and expected outcomes of the IISF 2020.

IISF will have many activities like invited lectures, popular lectures, webinar, debate, interaction, demonstrations, panel discussions, poster presentation, paper presentation, exhibitions, expo, quiz competition and virtual tour. The registration is open for 33 events out of 41 events. The participation in the overseas ministers and diplomats conclave, state S&T conclave, science education in India and Guinness World Records will be through nominations and direct invitation. The other events will have open registrations. The registrations can be done through the IISF 2020 website https://www.scienceindiafest.org/#/home

In a prelude to the main event, CSIR-Indian Institute of Chemical Technology (IICT), Hyderabad organised a curtain raiser event on December 1, 2020, to highlight the importance of the festival and create awareness among the public and students on the importance of science and technology in development of the nation.

Dr.Shekar C. Mande, DG, CSIR and Secretary, DSIR, delivered the presidential address and said people are interested to learn about the progress done at various science-based institutions. In this regard, he said the IISF that was held in Lucknow in 2018 recorded a footfall of 8 lakhs. This demonstrates that the public is curious to know the work being carried out in research laboratories and therefore it is our duty to showcase the research work to the common people. Citing the example of discovery of zero, he told that our achievements are phenomenal. Major scientific bodies like Department of Science and Technology, Department of Biotechnology, Department of Scientific and Industrial Research, Department of Earth Sciences, Indian Council of Medical Research along with VijnanaBharati have already organized this event in last five years with great success. Dr.AppaRaoPodile, VC of University of Hyderabad, and Chief Guest of the event, stressed the need to promote basic science. Schools are the first places for seeds to be sown in developing an interest in science among young students. Speaking about Indian science, Dr.AppaRao said, we have been making outstanding contributions to science since long. A look at the green revolution, white revolution and blue revolution that created a self-sufficiency in staple crops, dairy products and marine products was because of our scientific interventions and we have not relied on any one. Artificial Intelligence, data science and its applications, robotic automations, virtual reality are developed at our premier institutions. Combating the current pandemic was a collective effort of various institutes in the country and in less than 10 months we are now confident to deal with the virus, including developing of new anti-viral drugs and also possible vaccines. Such an effort is difficult to envisage in most countries across the globe. Nano medicine, synthetic genome cells, synthesis of natural products and much more work in various institutes in the country is paving the way for a self-reliant India.

Dr. S Chandrasekhar, Director CSIR-IICT, in his welcome address, urged everyone to follow guidelines for control of the pandemic such as wearing of masks and avoiding public gatherings.