The Chief Guest at the function in Manesar today to mark the 36th Raising Day of the National Security Guard (NSG), Union Minister of State for Home Affairs, G. Kishan Reddy while greeting the NSG, said that under the visionary guidance of Prime Minister, Narendra Modi and the leadership of Union Home Minister, Amit Shah the government is working with resoluteness to put the Nation First and the NSG is successfully implementing this philosophy.

The Union Minister of State for Home Affairs said that the NSG is a task-oriented force which has completed extremely commendable tasks from time to time. The NSG has played an important role in fighting the Covid-19 pandemic and the entire nation is proud of the NSG for its commitment to serving the country in adversity.

G. Kishan Reddy said be it the 2002 terrorist attack on Akshardham in Ahmedabad or the Mumbai terror attack of November 2008, the NSG displayed bravery and eliminated many terrorists, while saving many lives.

The Union Minister of State for Home, while conveying good wishes on behalf of the Prime Minister, Narendra Modi and the Union Home Minister, Amit Shah and the citizens, said that the NSG along with its operational work, also takes part in important measures taken by the government, such as the battle against Covid-19 pandemic, the Fit India Movement  and is also taking part in the Swachh Bharat Abhiyan. The NSG also organised a seminar in February 2020 to encourage the government’s Start Up plan. Environment projects such as Green Aravali, Solar Power, Water Harvesting and Sewerage Treatment are also being run, which is very commendable. Reddy also said that it is heartening that the campus of NSG is plastic free. 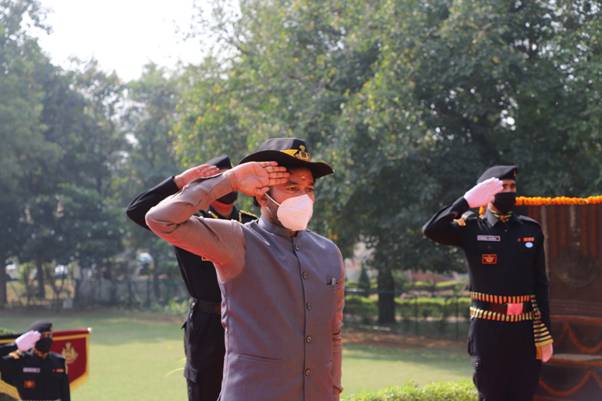 The Union Minister of State for Home also emphasised  that the NSG is amongst those forces in the world which is equipped with the most modern technology. He said, today, terrorism has changed its shape and the NSG is also strengthening itself in terms of training and technology, and is a source of inspiration for other security forces in the country.

Reddy said that while India believes from time immemorial in the philosophy of ‘Vasudhaiva Kutumbakam’, which means that the whole world is one family and while we never think ill of any person or country, however if anyone tries to harm India, then we are capable of taking decisive action. Earlier, the Director General of the NSG, Surjeet Singh Deshwal welcoming the Chief Guest informed him of the evolution of the NSG over the years and the achievements of the organization on the professional fronts of Counter Terrrorism, Counter Hijacking and protection of Highly Threatened Persons (HTPs) and capacity building of State Police Forces.

Reddy also released a book, “Shaurya” dedicated to the 19 Martyrs of NSG and presented Police Medals and Awards to NSG personnel on the occasion.