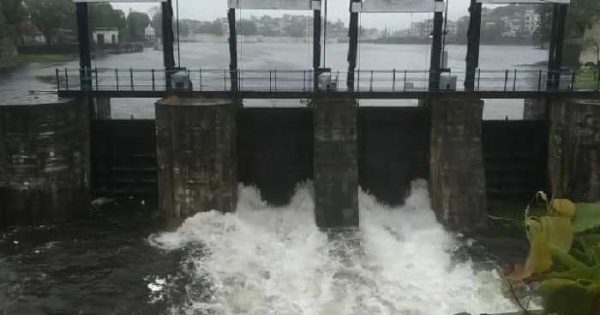 Udaipur : Udaipur and surrounding  areas  received more than  2 inches of  rainfall from Tuesday afternoon to Wednesday morning as the severe cyclonic storm Tauktae passed through Udaipur past midnight. Though the cyclone speed had slowed down, gusty winds and heavy rainfall were witnessed across the district that prevailed throughout the night.

Trees fell,  hoardings and boards were blown away in many areas and damages to several vehicles parked in the open were reported. Power supply was hugely disrupted in the city areas as electricity supply in many colonies, major market places remained suspended due to the  gusty winds.  While at some places power supply  resumed  around 4am, electricity supply could be restored in many areas including Ayad, BohraGanesh and surrounding colonies in the afternoon.

Two sluice gates of SwaroopSagar lake were opened by 2 feet each as the heavy downpour continued throughout the night and the  released water gushed through Ayad river.  Water level at Fatehsagar was  gauged at 9 feet while Badi Lake too received heavy inflow from waters gushing down from the hills.

The effect of the cyclone was  seen even on wednesday.  Lack of sunlight and  chilly winds marked the  day as drizzling too was reported from some areas. The effect of the cyclone was seen on the weather clearly as the minimum and maximum temperature dipped radically. It is said to be the first time in  many  years that fans, coolers and air conditioners have been switched off in May and people have taken out quilts and warm clothes to stay cozy due to the chilly winds.