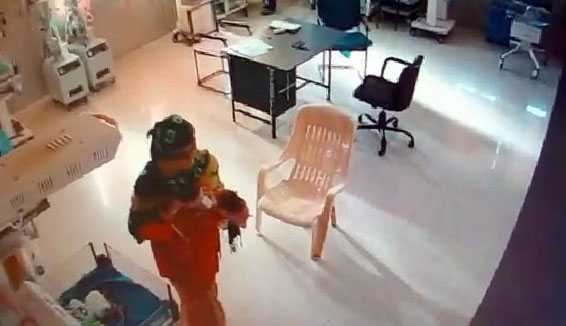 Udaipur : In a major breakthrough, Dungarpur police were successful in finding the culprits who had stolen a 4-day old baby from the government hospital’s NICU on Sunday. The mastermind behind the theft, a  childless woman and her mother have been arrested while her husband and brother who were involved in the conspiracy are at large, police teams have been set out to nab them,

Dungarpur SP Sudhir Joshi told the media. Jyoti Mochi, the baby’s mother, had delivered on February 24 and two days later the baby was shifted to the critical care unit after he was diagnosed with jaundice. The accused Neeru wife of Dinesh Gameti took away the baby from the NICU when no one was around however, she was caught by the cameras.

The baby was rescued from Tallaiya village, some 30 kilometers from the district headquarters from the accused’s home on monday evening. Neeru and her mother Ramila were arrested.  ” The baby is healthy and has been handed safely to his mother Jyoti who is kept under medical observation. Based on the CCTV footage from the hospital, the woman was identified as Neeru, a resident of Bhatwada who was married to Dinesh Gameti of Tallaiya in Bichhiwada.

Ten teams had been constituted that held intense searches at several places and managed to locate Neeru. We found the baby from her custody” Joshi said. Neeru was married in 2013 and after many years of marriage the couple didnt have any children. Neeru had attempted twice on earlier occasions to steal babies from the hospital but she succeeded this time. Her mother Ramila, husband Dinesh and brother Yogesh too helped her in the conspiracy. Yogesh drove her to the hospital on Sunday and soon Neeru found a chance to lift a baby from the NICU, the brother-sister duo fled from the spot with the infant