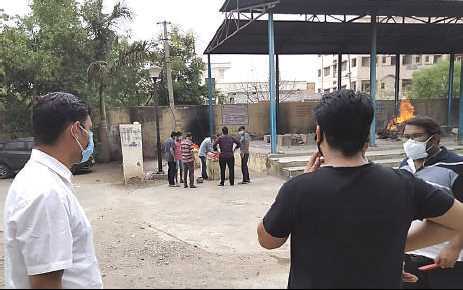 Udaipur : Families of those who died of COVID are suffering due to the exorbitant prices being charged at cremation grounds. The District Legal Service Authority held a decoy operation at 4 cremation grounds in Udaipur on Thursday and found that at two of the places, prices for the funeral were unreasonably high.There were no authorised staff at these grounds and middlemen were charging money to their desire.

Kuldeep Sootrakar, ADJ and secretary DLSA inspected cremation grounds at Ashok Nagar, Savina, Sector 3 and13 and found anomalies. At Sector3, the guard was not present and an unauthorised person who was holding the cremation of the bodies, said that 15thousand rupees would be charged for COVID bodies.

The judicial team which did not reveal its identity and bargained for some concession was treated rudely by the person. He also said that 15 thousand was only the fees for carrying the body from the ambulance to the pyre while setting up the woods and arrangements were tobe done by the family.

The expenses for woods and other materials for the rituals too had to be borne separately, he said. Santosh Menaria of the judicial team said that at sector 13,a person wearing an id card byan oil company was supervising the task.

He was an unauthorized person and mediator who demanded 2100 rupees without making proper entry of the deceased before the last rites. The DLSA team made a detailed report of the irregularities and has sent it to the SP and Municipal Corporation for further action.