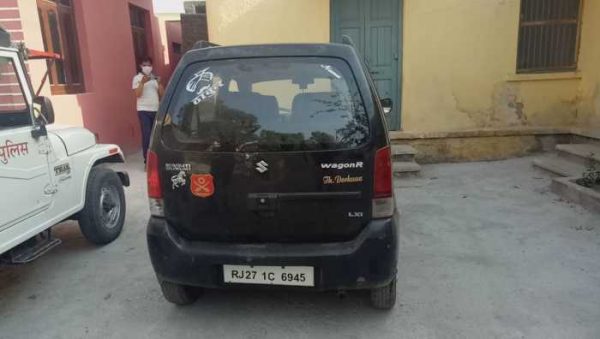 Udaipur : Four men were killed while four other injured when a drunk driver of a speeding car mowed them down near Bore Talai turn on the Bhinder-Kanod road in Udaipur district on Sunday late night. The incident  took place between 11.30 pm to 12am where a tube well digging process was going on at one Mangilal Meghwal’s field adjoining the road and people had gathered to watch it. A speeding car went out of control and ploughed through the field, knocking down the men.Speaker of the Lok Sabha Om Birla expressed grief and sent a condolence message over the incident.

” The driver of the car and three passengers seated inside were under the influence of alcohol at the time of the incident. All of them have been detained and the car has been seized.A case of reckless driving has been registered” Udaipur SP Rajiv Pachar who went to the accident spot, said.

The deceased were identified as Narendra Singh Rajput (BoreTalai), Bhagwati Lal Jatiya (FatehNagar) , Puran Ahir (Mangalwad) and Mahendra Meena (Falasiya). Among the injured were Kailash Rawat, Shivlal Meghwal, Devu Bai and  Kalulal Meghwal. Three were referred and admitted in Udaipur. Witnesses said people screamed in panic as the speeding car went off road and ran over the crowd.People ran helter skelter to save themselves while the car dragged to several meters inside the field.

After the incident, the driver fled away from the spot. Police laid checkpoints at all the major junctions and crossroads and succeeded to arrest the men. The driver Gajraj Singh (23)  is employed in the water works department who got the job on compassionate ground after his father’s death. He had gone out to party with his friends Chhotu Singh, Hemant Singh and Lalit Singh and all the four had consumed alcohol.