Erica Fernandes ups the glam quotient as she holidays in Maldives 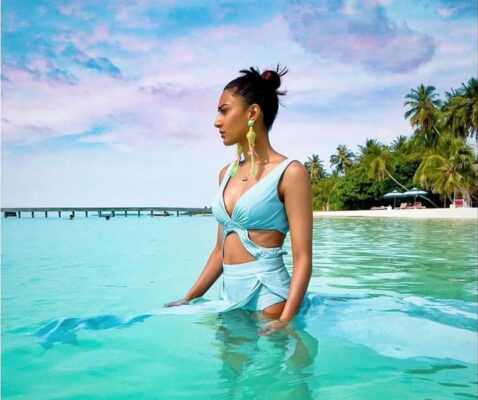 The stylish actress has more than 3 million followers on Instagram, with whom she loves sharing her personal and professional updates. Erica became a household name courtesy her crackling chemistry with Parth Samthaan aka Anurag in ‘Kasautii Zindagii Kay.’ Erica Fernandes also played the role of next-door-girl Sonakshi in ‘Kuch Rang Pyar Ke Aise Bhi,’ where her on-screen chemistry with co-star Shaheer Sheikh (Dev Dixit) was a huge hit. Earlier, Parth Samthaan, who is rumoured to be dating Erica Fernandes, clarified that he is not dating his ‘Kasautii Zindagii Kay’ co-star.

Parth said that he and Erica are just friends. Parth Samthaan had shared a few pictures on his Instagram handle in which he was seen posing with his ‘Kasautii Zindagii Kay’ co-stars Erica Fernandes, Sahil Anand and others during Diwali celebrations and he wrote, “Diwali spent with the people who I have spent most of my time this year …#kasautiigang#blackjacknight♠️♥️♦️♣️@poojabanerjeee we missed you”. (photo: Instagram)