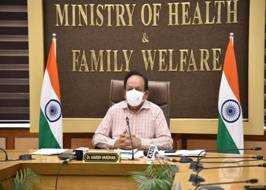 Briefing about the COVID situation in the country, Dr. Harsh Vardhan outlined that at present there are 30,27,925 active cases in the country. In the last 24 hours, 3,57,295 COVID patients have recovered and a recovery rate of 87.25 % is being observed. He expressed satisfaction that daily recoveries have outnumbered the daily new COVID cases for the last 8 days consistently. India is observing less than 3 lakh cases from the last 5 days. He informed that in the last 24 hours, India has conducted the highest ever 20,61,683 tests with the cumulative tests being over 3,30,00,000.

Underscoring the critical importance of vaccination drive, the Minister highlighted that India has administered a total of 19,18,89,503 vaccine doses to its citizens. He stated that the government is in the active process of supporting the manufacturer of vaccines for ramping up vaccine availability in the country. He expressed hope that in the subsequent months, there will be an exponential rise in production of vaccines in the country. He added that “Between August to December 2021, India will have procured 216 crore vaccine doses, while by July this year, 51 crore doses will be procured”. The Union Health Minister also said that by the end of the year, the country will be in a position to vaccinate at least all of its adult population.

Highlighting the issue of Black Fungus (Mucormycosis), Dr. Harsh Vardhan informed that all the states/UTs have been asked to notify it as an epidemic and ensure that all the cases of black fungus are duly reported. He assured that all the necessary information and guidelines regarding diabetes control and restricted use of steroids have been provided to states. He also touched upon the speculation that the virus might mutate in future and endanger children.He informed that the health facilities are being upgraded to deal with any such exigency.

Dr Harsh Vardhan presented a snapshot on the COVID situation in all the states/UTs. In Chhattisgarh, intense transmission has been observed since March 2021. The State was observing a near positivity rate of 30% at the start of May. In Himachal Pradesh, there are more than 35,000 active cases, while the fatality rate (1.44%) is much higher than national average. Dr. Harsh Vardhan underlined the issues like complacency, marriages, super spreaderevents etc., for the steep rise in cases in Himachal Pradesh. He informed that Goa is witnessing a rising trend with 22,000 active cases. Daman and Diu has 366 active cases and a declining trend is being observed. Similarly Ladakh is also showing a declining trend with 1,500 active cases at present.

Dr Harsh Vardhan cautioned towards the new emerging trend in the country. He highlighted that now the smaller states are showing an upward trend and there is a dire need to be extremely cautious. He asked the states to follow the basic principles of COVID Appropriate Behaviour along with testing, tracking, tracing, treating and now vaccinating to fight against the pandemic. He emphasised the need to step up vaccination and reiterated the need to dedicate 70% of vaccines provided by the central government for the second dose. He also requested the states/UTs to be vigilant against vaccination wastage.

Ashwini Kumar Choubey, MoS (HFW) reiterated that testing and vaccination should be the focus. He stated that the Centre is providing full assistance to states in terms of medicines for Mucor mycosis, and also Oxygen for the hospitalised patients. He also appreciated the efforts made by all the States/UTs in the fight against COVID.

Through a detailed and comprehensive presentation, Sujeet Kumar Singh, Director NCDC highlighted the trend of active cases, positivity rate and fatality rate in nine states/UTs. He cautioned against the rising cases in smaller states especially Himachal Pradesh. He emphasised on the need to increase surveillance, testing and focus on potential hotspots.

Ms. Vandana Gurnani, Additional Secretary (Health) presented on the progress of vaccination in these 9 State/UTs. Chandigarh (29%), Puducherry (25%), Dadra & Nagar Haveli (24%) lag behind the national average (35%) in coverage of 45+ age group while UTs like Chandigarh, Lakshadweep, J&K, A&N islands lag far behind in coverage of their healthcare and frontline workers.

Taking note of advice to augment their preparedness to contain COVID-19, the State Health Officials expressed gratitude for the help they have been receiving from the Union Government. Dr Harsh Vardhan assured the states of all support from the Centre in augmenting their vaccine drive.