Union Minister of State for Culture & Tourism (I/C) Prahlad Singh Patel handed over the Bronze idols of Lord Rama, Lakshmana and Goddess Sita to Idol Wing, Government of Tamil Nadu at a ceremony held today in ASI Headquarters, Dharohar Bhawan in New Delhi.Senior officials from the Ministry of Culture, ASI and Government of Tamil Nadu were also present on the occasion. 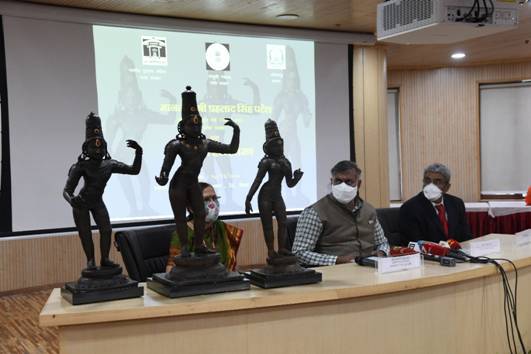 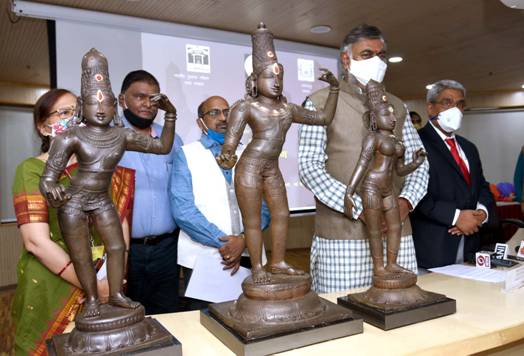 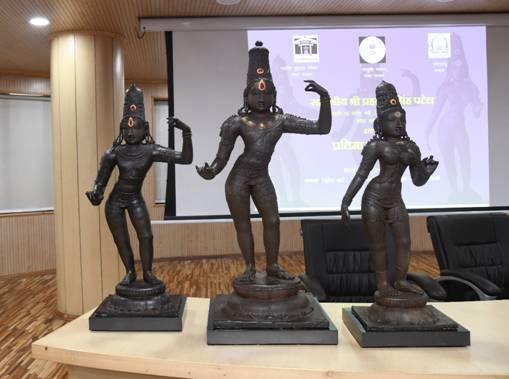 Earlier, on 15th September 2020, these Bronze idols were handed over to High Commission of India in London by Metropolitan Police, London.  As per the photo documentation done in 1958, these idols belong to the Sri Rajagopal Vishnu Temple (temple built during the Vijayanagara period) in Anandamangalam in Nagapattinam district of Tamil Nadu. As per the investigation carried out by the  Idol wing of Tamil Nadu police these idols were stolen from the Sri Rajagopal Vishnu Temple on 23/24 November 1978.

The bronze idols of Lord Rama, Lakshmana and Goddess Sita are the masterpieces of Indian Metal Art and are 90.5 cm, 78 cm, and 74.5 cm in height respectively. Stylistically, these sculptures are dateable to the 13th century AD.

Briefing the media during the handing over ceremony, the Minister highlighted that under the able leadership of Prime Minister Narendra Modi, total 40 antiquities have been retrieved from foreign countries to India since 2014 while only 13 such antiquities were retrieved prior to 2014 from 1976.

He congratulated the Archaeological Survey of India, Special Idol Wing, Government of Tamil Nadu, DRI and High Commission of India, London for their continuous efforts in bringing these idolsback to the country.

The Minister also announced that as a part of commemoration ceremony of 75th year of Indian Independence, the agencies/applicants working in the areas of Indian Independence movement, life of freedom fighters, Indian traditions, heritage and culture, tourism development and promotion and other issues relating to national importance will be exempt from payments of fees/charges for shooting/photography in different monuments of ASI ( except  World heritage sites/ Iconic sites) during the period commencing from the Birth Anniversary of former Prime Minister Late Atal Bihari Vajpayee on 25th December 2020 to 15th August 2021. The applicants/agencies will need to apply online for permission to carry out such shootingactivities.

In August 2019, High Commission of India, London was informed by India Pride Project that 4 antique idols ( Rama, Sita, Lakshmana and Hanumana), stolen from a temple built in Vijayanagara period in Tamil Nadu and were smuggled out of India, may be to the United Kingdom.

Photo documentation of these three metal sculptures was done in June 1958 at Sri Rajagopal Vishnu Temple (temple was built during the Vijayanagara period) in Anandamangalam in Nagapattinam district of Tamil Nadu. There were four idols in this picture – Sri Rama, Sita, Lakshmana and Hanuman. Therefore, the idols were in the temple till at least 1958 and were later stolen.

The Art and Antique Unit of the London Metropolitan Police investigated the matter and based on information and documents provided to them, contacted the owner of the statues and conveyed Mission’s request to return the statues as they appeared, prima facie, to be stolen idols from a living temple in India. Subsequently, the Metropolitan Police handed over these statues to the High Commission of India, London on 15th September 2020.

As a result of the continuous efforts of the Archaeological Survey of India, Special Idol Wing, Government of Tamil Nadu, and High Commission of India, London, these statues are now back in the country.