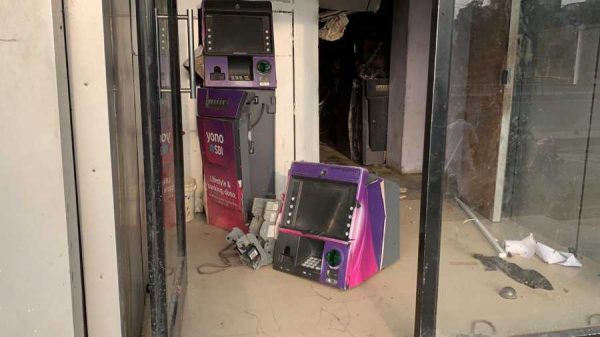 Udaipur : In a major heist,  thieves  uprooted a highway ATM on Friday night and fled with the machine which approximately had some 30 lakh rupees cash inside it. The ATM was of SBI located on the Bhilwara -Chittorgarh main road in Gangrar block. The thieves locked the guard inside the guard room before lifting the machine who could be released only in the morning when people came to know about the theft. Multiple teams have been assigned the task to identify the accused and get some clue on the basis of CCTV footage at toll plazas. Police is questioning bank officials about exact amount in the ATM and security measures to safeguard it.

SP Anil Kayal, Kapasan DySP Dalpat Singh, Gangrar SHO Kailash Soni, CIs from Sadar and Chanderiya police stations went to the crime spot to investigate. Police informed the bank and the company which had the tender to refill cash in the ATM. The company representatives told the cops that they had deposited 10 Lakh rupees on Friday while 12 lakh rupees was deposited on Thursday. The robbers left the screen portion in the kiosk and fled with the lower part containing cash.

The guard Ratanlal Salvi said that some men had come in a trola and stopped outside the shutter which was pulled down. One of them told the guard that he didn’t have a single paisa in his pocket and that his employer had sent money to his bank account. When the guard opened the shutter the men went inside and attempted to take out money. He then told the guard that he didn’t knew to operate the machine and asked for his help. The guard took the debit card from the man and while he was doing the withdrawal process, the men tied his hands from behind and thrust cloth inside his mouth. They locked him inside the guard room and held him hostage.