Thaawarchand Gehlot, Union Minister for Social Justice and Empowerment toady e-inaugurated through video conference an inaugural Camp for free distribution of Aids & Assistive devices at Block level among the identified 3551 Divyangjans under ADIP Scheme and to 596 Senior citizens under Rashtriya Vayo Yojana of Government of India at Nagaon city of Assam. The Camp was organized at Elfinstone Bibah Bhavan, in Nagaon wherein distribution of Assistive devices of worth Rs. 2.62 Lakhs was done among 50 number of beneficiaries. Different categories of assistive devices were distributed to Divyangjan and Senior citizens which includes Tricycle, Wheel Chair, Walking Sticks, Smart cane, Smart Phone, Hearing Aid, Tetrapod & Tripod etc. 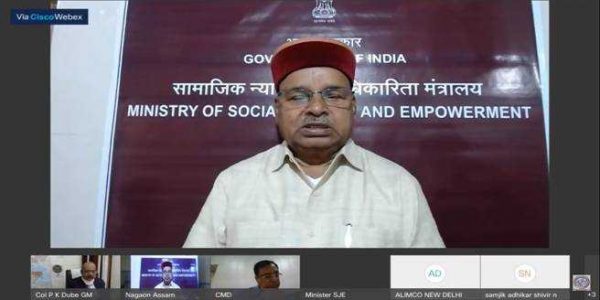 Addressing on the occasion Thaawarchand Gehlot said that under the leadership and guidance of the Prime minister, his ministry has been able to implement new Act for persons with disabilities to empower Divyangjan. Now the categories for disability has increased from for 7 to 21 and increased reservation for Divyangjan in government jobs from 3% to 4% and also reservation in higher education is now increased to 5%. He further informed that, ministry is working on providing Unique ID cards for Divyangjan in all states covering 709 districts 50.33 Lakh UDID cards have been issued, union minister appeal that all the districts in the state of Assam may also work on this and issue UDID cards to Divyangjan. Looking at the interest towards the sports among the Divyangjan of the country and their good performance in Paralympics, ministry has decided to establish ’Divyangta Khel Kendra’ in Gwalior (M.P), he also informed that ministry is also establishing National Mental Health Rehabilitation Center in Sehore, Madhya Pradesh, work on both the project has been started by CPWD.

Total 4147 number of beneficiaries of Nagaon District will be provided with 7585 number of assistive appliances of different category valuing worth of Rs. 261.15 Lakhs, these assistive devices will be distributed among the beneficiaries by organizing series of distribution camps at block level. Among the total 4147 beneficiaries 3551 are Divyangjan and 596 are Senior Citizen, the identification and registration of beneficiaries were done during the assessment camps conducted by ALIMCO in the month of July and August last year.

The camp was organized by Artificial Limbs Manufacturing Corporation of India (ALIMCO), Kanpur working under the aegis of Department of Empowerment of Person with Disability (DEPwD), Ministry of Social Justice and Empowerment (MoSJE), Government of India in association with Social Welfare Department, Assam and District administration, Nagaon.  Camp will be conducted as per new approved Standard Operating Procedure (SOP) issued by Ministry in wake of COVID 19 pandemic. The distribution conducted adhering the guideline issued by government of India to contain spread of COVID 19. Social distancing, arrangements of thermal screening for each individual, proper masking of face, sanitization of venue and of assistive devices, use of PPE kits by the professionals reaching out the beneficiaries were ensured during the event.