Sh Prahlad Singh Patel pays tributes to Shaheed Ram Prasad Bismil on his birth anniversary at Shahjahanpur, UP as a part of Azadi Ka Amrit Mahotsav 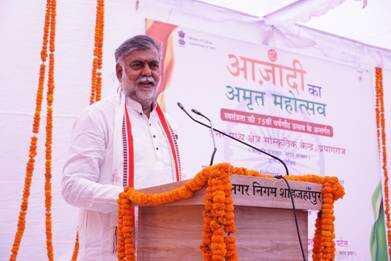 Saluting to Pt. Ram Prasad Bismil, Patel said that Shaheed Bismil followed his conscience and lived a meaningful life by pursuing an  ideal. The Minister also said that there are only a few examples of persons who have accumulated such a vast knowledge and also lead such a struggle. 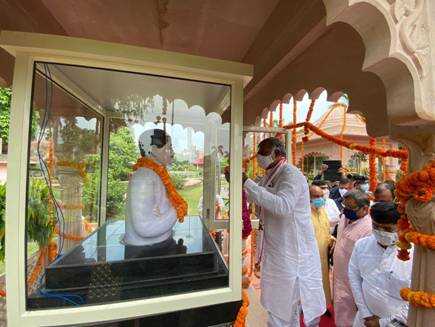 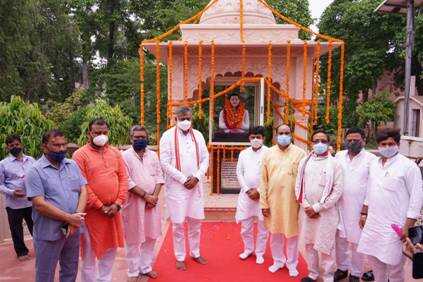 This special event was organized by the NCZCC, Ministry of Culture. Suresh Khanna, the Minister of Finance, Parliamentary Affairs & Medical Education, Govt of U.P who is also the MLA from Shahjahanpur; Neelkanth Tiwari, the Culture & Tourism Minister, Govt. of U.P.; Arun Kumar Sagar, the M.P. of Shahjahanpur& district officials were also present in the Pushpanjali Ceremony.

As a tribute to the poet – revolutionary, a small cultural presentation   dedicated to his legacy was also made. At the time of Pushpanjali, Navin Mishra  played devotional music on Sitar. Leading exponent of Kissagoi, Himanshu Bajpai  narrated Shaheed Bismil’s life story followed by performance of patriotic songs by Kishore Chaturvedi & Group.

Pt. Ram Prasad Bismil, born on 11th June, 1897 in Shahjahanpur was amongst the most notable Indian revolutionaries who fought against British colonialism. He wrote powerful patriotic poems in Urdu and Hindi under the pen name of Bismil from age of 19. He formed the Hindustan Republican Association with leaders like Bhagat Singh and Chandrasekhar Azad and participated in the Mainpuri conspiracy of 1918, and the Kakori conspiracy of 1925 with Ashfaq Ullah Khan and Roshan Singh to  protest against the British Rule. He was martyred at Gorakhpur Jail on 19th December, 1927 just aged 30, for his role in Kakori conspiracy. While in jail, he wrote ‘Mera Rang De BasantiChola’ and ‘Sarfaroshi Ki Tamanna’ which became the anthem for freedom fighters.