No place inside home, Youth make machan to stay quarantined 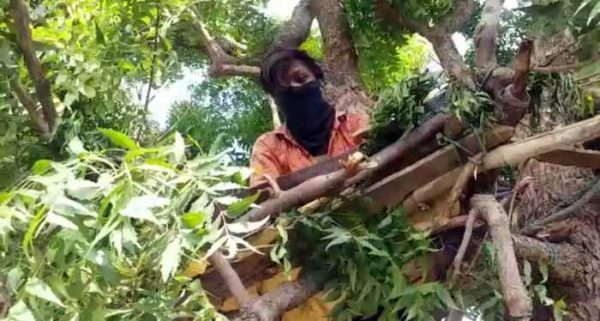 Udaipur : While some are grouchy when quarantined even in luxurious facility centers, a village youth has set an example by quarantining himself on a machan built up on a Neem tree. Eishwar son of Bhamru Rawat of Dabkia village in Bhinder block of Udaipur decided to spend fourteen days of quarantine period on a machan since his home, a small hut had only two rooms. Bhamru’s three sons Pappu, Eishwar and Jitendra had recently returned home.

While Eishwar and Jitendra who worked in Surat, reached home on May 2, their elder brother Pappu reached on Monday morning. On getting information, survey teams from the medical department went to the village and instructed them for home quarantine however, the brothers were in a fix since their hut was too small with only two rooms. One was occupied by their parents while Pappu and his wife had the second room for themselves.

While Jitendra chose a corner of the open space outside the house, Eishwar had nowhere to stay and hence he thought of putting up a raised platform (machan) on a neem tree in front of their home. Pappu’s wife serves food to the three brothers in intervals as precautionary measures to prevent the risk of infection. ” I had no other option because i cant take shelter in any relative’s house in such a time. It is natural that everyone feel scared by people like me who have come from outstations. Neem tree has medicinal properties and which place would be safer for me than this one” Eishwar says.