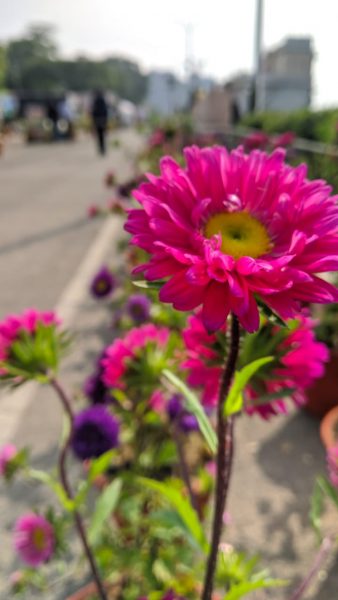 Udaipur : Flower show is one of the major attractions for residents and tourists in winter in Udaipur and the fifth edition of the event was inaugurated by the divisional commissioner Vikas Bhale on Wednesday here at the famous Fatehsagar lakeside. Even before the official inauguration, the show drew large crowd throughout the day with the young and old equally delighted to watch the exotic and decorative flowers put on display.

The show is being hosted by the Urban Improvement Trust (UIT) where hundreds of rare and exotic varieties of flowers including hybrids have been put up for the public display. The flowers include Zerbaras, Coranatio, Marigold, Cactus, Anthurium, Bromiliares, Petunia, Coxcomb, Seleucia, Helichrysum, etc.Various companies, flower sellers, educational institutions are taking part in the show while flowers grown at the PWD and Udaipur Municipal Corporation nurseries too have been displayed. Some stalls are displaying floral pots they have grown.

During the 10 days event, ten thousand plants would be distributed free-of-cost to visitors so as to promote horticulture as well to bring people close to nature, UIT secretary Arun Hasija said. Some activists approached the authorities complaining over branding by private participants in the last edition. ” More than the flowers and floral art, companies were seen promoting their profiles at the counter which needs to be checked to avert commercialization of the event” an activist claimed.

“The natural scenic beauty of the place  and the beautiful flowers captivates a person to such an extent that anyone would forget his worries and find peace and calm here” Deepti Sharma, a lecturer at Sukhadia University, who visited the show said. “Keeping flower and decorative plants at home, hotels, hospitals and private drawing rooms is gaining popularity, not many people know from where these plants can be purchased. Therefore, there should be a marketplace as well as government controlled rates so that people can easily buy them” Neha Damani, an advocate said.