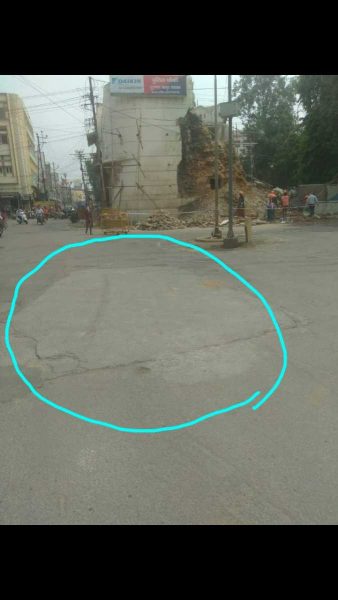 Udaipur : Heritage lovers and activists were up in arms against the Udaipur Municipal Corporation and Smart City Limited (USCL) company after a portion of a three centuries old heritage gate-Surajpole, collapsed in the wee hours of Sunday. People were shocked and saddened to see the debris spread in one of the busiest junctions of the city.The iconic gate is a part of the glorious history of Mewar when Udaipur Nagarkot- the city wall or bastion was completed in 1733 by Maharana Sangram Singh-II, having 12 gates in it, four of which on the four main roads having double gated enteries i.e Sinvha Dwaar. The gates were built for the city’s security after Aurangzeb’s attack in February 1680 during which the Mughal ruler destroyed over 172 big and small temples of Udaipur.

While activists held the unmindful developmental activities undertaken under the Smart City project responsible for the collapse, experts said the centuries old masonry constructions need careful upkeep and handling which is thorougly being neglected. Presently, a deputy SP office and a police chowky is functional inside the gate. Sewage pipe line drilling work as well as the gate restoration too is simultaneously in progress in the area.

” This collapse before heavy rains is mainly attributed to the vibrations (tremors) due to the heavy machinery used for the sewage pipeline excavations. But the collapse, of a Dy. SP office & Chauki part of the gate will reveal the building material that was used for the constructions in the 18th century” said P.S. Ranawat, an expert in Geo-Heritage and a retired profesor of Geology. ” They have build manholes on the three sides of the Surajpole gate and were doing the underground drilling to connect the line which damaged the foundation of the heritage building. The rock and soil around Surajpole is quite soft which need not to be drilled by heavy machinery, but the construction team perhaps didnt bother to do a proper analysis before embarking into drilling work near the sensitive heritage building” R.S Sameeja, an activist claimed.

Meanwhile, Qummer Ul Zaman Chaudhary, CEO of USCL rubbed off the charges of negligence and said the old building was in dilapidated condition which was the main reason for collapse. ” We have already restored 3 of the total 12 gates and there are vertical cracks on all of them. We have tendered the restoration works of the heritage structures keeping in mind the minute technicalities and roped in experienced hands. The drilling work too is being done with utmost care and no private buildings have been caused any harm except this one which is an exception. However, we will be more careful next time and if needed, a committee would be made to call an enquiry on this collapse” the officer told Udaipur Kiran.