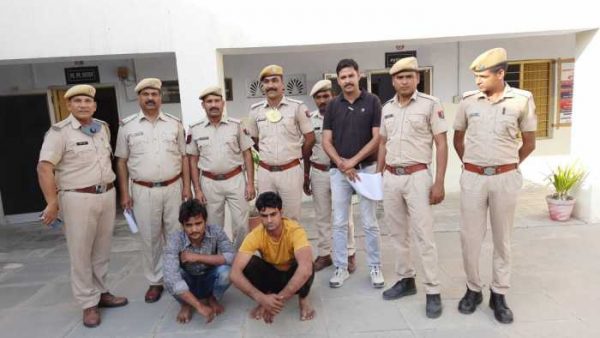 Udaipur : Two men of a gang from Haryana, involved in ATM robbery were arrested by the police under Chanderiya police station limits of Gangrar block past Sunday midnight.

Police found these men trying to cut the ATM located on the RIICO industrial area main road with the help of a gas cutter. Few men sitting inside a car parked outside the ATM and guarding the area, fled after seeing the police team.

Chittorgarh SP Deepak Bhargava said the night patrolling team found suspicious activities outside the ATM when they saw a car parked there at late hours. When they stopped,the car driver raced the vehicle and tried to flee.

The cops held a nakabandi after informing the control  room while when the team went to see the ATM kiosk they found the shutter pulled down but smoke emitting out of the cabin. Inside two men Haider and Jaffaruddin were seen trying to cut the machine to steal the cash inside. The men said that 3 aides were inside the car which was guarding the area while they were cutting the machine.

The accused also said that the gang rackied the place and sprayed black paint on the cameras before they got inside the cabin. Police teams have been raiding different places to find the remaining members of the gang.

The culprits at large are kingpin of the gang Ishan Qureshi, Shahrukh son of Zuber and Shahrukh all from seperate villages in Haryana. The bank officials who visited the ATM kiosk on Monday told the police that the machine had 11.60 lakh rupees inside which was saved due to the alert patrolling team.