Arjun Munda, Union Minister for Tribal Affairs, launched the virtual edition of Aadi Mahotsav- Madhya Pradesh today. The 10-day long festival, commencing on December 1, 2020, is being hosted on the Tribes India website(www.tribesindia.com). The main focus is on the tribal craft and culture of Madhya Pradesh. Ms. Meena Singh, Minister for Tribal Development, Government of Madhya Pradesh and Ramesh Chand Meena, Chairman, TRIFED were the guests of honour for this online inauguration today. 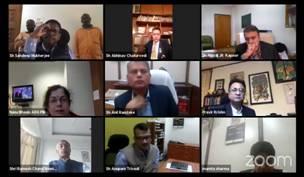 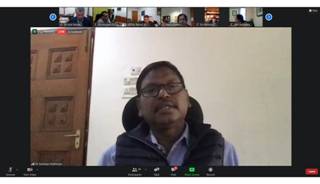 Addressing on the occasion, Arjun Munda said that the Virtual edition Aadi Mahotsav –Madhya Pradesh” is another effort to help in the transformation of tribal lives and livelihoods. Despite the pandemic, the team of TRIFED Warriors have organised this annual tribal festival that celebrates the spirit and richness of tribal culture virtually and are continuing with their efforts to connect the tribals to larger markets this year.

He said that he is really happy to be a part of the inauguration of Aadi Mahotsav today projecting the state of Madhya Pradesh. Aadi Mahotsav is a national tribal festival and a joint initiative of Ministry of Tribal Affairs, Government of India & Tribal Cooperative Marketing Development Federation of India (TRIFED). The festival showcases traditional art and handicrafts and cultural heritage of the country. The ultimate objective of TRIFED is socio-economic development of tribal people in the country by way of marketing development of the tribal products, and under the leadership of Pravir Krishna, MD, TRIFED has really been doing a wonderful job towards the upliftment of the Tribal Community in the Country.

Munda expressed his happiness that despite challenging circumstances of Pandemic Covid-19, efforts are being carried out by TRIFED and the Ministry of Tribal Affairs to mitigate the adverse conditions of tribal populations. Extolling the virtues of the simple, sustainable lifestyles of these tribal people, he expressed his concern at the disadvantaged economic state of this section and was happy that with TRIFED’s initiatives, the middlemen have been eliminated and the benefits are directly going to tribal people. He advised that TRIFED should carry on with its initiatives to help empower these tribals and make them Atmanirbhar. 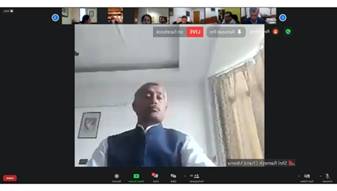 Ms. Meena Singh, Minister for Tribal Development, Madhya Pradesh in her address welcomed the idea of Ministry of Tribal Affairs, Government of India to organise National Tribal Festival “Aadi Mahotsav” all over India.

Ramesh Chand Meena, Chairman, TRIFED congratulated TRIFED and its team for providing such a viable alternative available to the tribal artisans and hoped that this virtual Aadi Mahotsav would be a successful event.

In his welcome address, Pravir Krishna spoke about the entire concept of Aadi Mahotsav and the current online version and how it will only help in popularising tribal culture to national and international audiences. With the onboarding of more than 3500 tribal artisans on to the Tribes India Marketplace, this virtual event offers the tribals a new avenue for popularising their culture and arts and will go a long way in helping the economic situation of these tribal artisans and make them self-reliant. 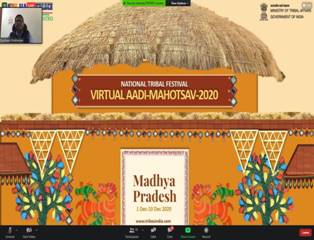 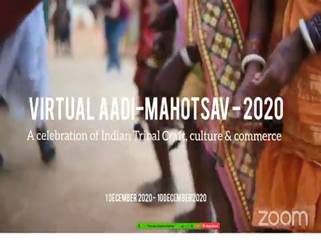 The highlights of the virtual launch included a virtual tour of the artisans’ work place and glimpses of the tribal dance and music from Madhya Pradesh. It was also announced that the next focus state from the 11th December would be Gujarat, following which the spotlight would shift to Bengal from the 21st December, 2020. 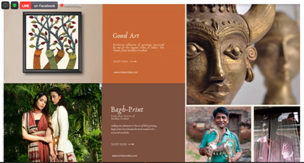 The Aadi Mahotsav – A Celebration of the Spirit of Tribal Culture, Crafts, Cuisine and Commerce – is a successful initiative that was commenced in 2017. The festival was an attempt to familiarise the people with the rich and diverse craft, culture of the tribal communities across the country, in one place. Held between 16-30 November, 2019 in New Delhi, the 15-day festival featured an exhibition-cum-sale of tribal handicrafts, art, paintings fabric, jewellery. More than 400 tribal artisans and producers from across India enriched the festival with their participation and it received tremendous response.

Despite the unprecedented circumstances caused due to the pandemic this year, TRIFED has moved the event online and will be hosted on the Tribes India E-Marketplace (market.tribesindia.com)

The event will showcase the tribal traditions of the various tribal communities – by having their crafts and natural produce on display. Videos showcasing different aspects of their culture – music, dance etc, will also be shared. In essence, it will still be a celebration of the tribes and their diverse, varied lifestyle but on a different platform. 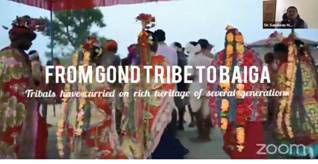 Tribes India e-market place is a noteworthy initiative that showcases the produce and handicrafts of tribal enterprises from across the country and helps them market their produce/ products directly. It is a major leap towards the digitisation of tribal commerce.

The virtual Aadi Mahotsav, which will bring the spotlight on all the major tribes one-by one, will be an excellent platform for not only the region/ tribes in focus.  This helps in bringing the tribal culture, life, traditions, crafts etc to the mainstream, while retaining their unique flavour as is. The Tribes India e-marketplace sources various handicraft, handloom, natural food products across the country and brings the best of tribal produce/ products.