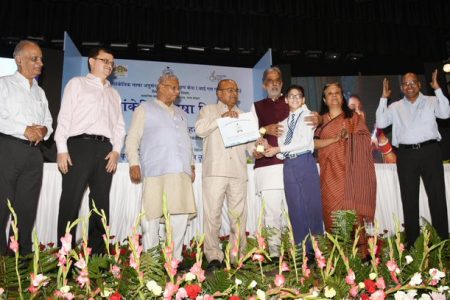 ‘Sign Language Day’ was celebrated by the Indian Sign Language Research and Training Centre (ISLRTC), an autonomous body under the Department of Empowerment of Persons with Disabilities, M/o Social Justice and Empowerment here today. Union Minister for Social Justice and Empowerment Thaawarchand Gehlot was the Chief Guest and Ministers of State for SJ&E Krishan Pal Gurjar and Rattan Lal Kataria were the Guests of Honour. Secretary, DEPwDMs. Shakuntala D. Gamlin, Secretary, DEPwD Dr. Prabodh Seth & Director, ISLRTC were present.The programmeincluded cultural performances like drama and songs in ISL by the students and faculty members of ISLRTC and presentation of awards to children with hearing disability.

Addressing on the occasion, Thaawarchand Gehlot said that the Government of India is committed to bring all Divyangjans in to mainstream. He applauded ISLRTC for bringing out a Dictionary of 6000 Sign Language words and hoped that 4000 more new Sign Words will be added in to it by 2020. Sign Languages have an ancient history and now a days these are being developed in a modern manner. Efforts are also on to bring uniformity in these sign languages at national and international level. He dwelt upon many initiatives of his ministry for the welfare of Divyangjans.

In his address, Krishan Pal Gurjar said that the Sign Languages are the Medium of Communication among people with hearing disability. Even in ancient period, when Vocal languages were not developed, people used to communicate through Sign Languages.

Rattan Lal Kataria in his address, said that Sign Languages are very enriched languages. When we talk of Sign Languages, we talk of the culture of their countries. He praised the efforts of ISLRTC for doing commendable service to the people with hearing disability.

The award distribution ceremony for the winners of the 2nd Indian Sign Language Competition 2019 was conducted during the programme. For the Competition, entries were invited from children with hearing disability on jokes, stories and essays in Indian Sign Language, studying in Delhi-NCR. The students have showcased their creativity and knowledge in their submissions.