Seventh phase: 25.49 per cent voting recorded till 12 noon in 59 constituencies 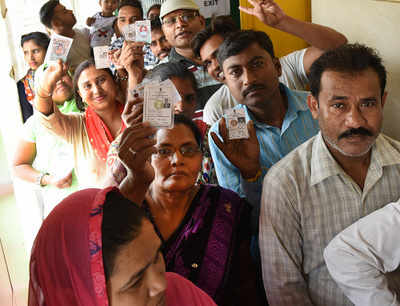 New Delhi : At least 25.49 per cent voting has been recorded till 12 O’clock in 59 constituencies spread over 7 states and one union territory. Elaborate arrangements have been made to ensure free, fair and peaceful polling.

Voting, which began at 7 AM, will end at 6 PM. Voting is taking place for 13 seats each in Uttar Pradesh and Punjab, nine in West Bengal, eight seats each in Bihar and Madhya Pradesh, all four constituencies of Himachal Pradesh; three in Jharkhand and the lone seat of Chandigarh.

Polling time in ten Naxal affected assembly segments of Patliputra, Sasaram and Karakat is from 7 am to 4 pm. In other places, polling time is up to 6 pm. Over one crore 52 lakh voters will decide political fortune of 157 candidates including 20 women.

In Himachal Pradesh polling is underway for four  Lokssbha seats for which  45 candidates are in the fray.

The fate of Mahendra Nath Pandey, Kirron Kher, Sunny Deol and Ravi Kishan of BJP, Sukhbir Badal of Shiromani Akali Dal, Meira Kumar and Shatrughan Sinha of Congress and Shibu Soren of JMM will also be decided in this phase.