Runaway bride says she was abducted, 5 including lover arrested 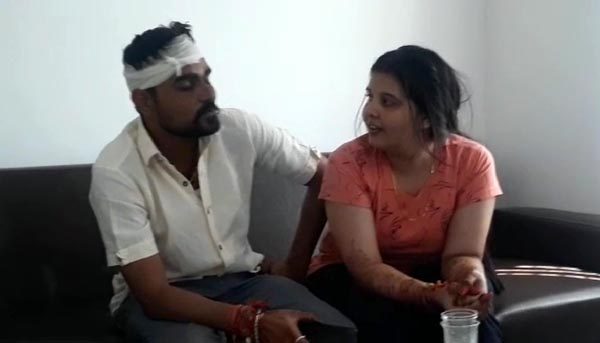 Udaipur : Vineeta Suthar, the runaway bride who had allegedly conspired with her lover an abduction incident to evade a forced marriage, took a U-turn and gave statement against lover Priyank and his four friends who had taken her away from the car on Tuesday morning while she was on her way to in-laws home after marriage. The bride expressed desire to go with her husband while the accused and his four aides are in police custody.

Udaipur police had caught the couple from a private bus in Sindhi camp in Jaipur in the wee hours of Wednesday who were brought to Udaipur later afternoon. Vineeta in her statement to the police said that she was abducted against her wishes by Priyank and his friends. In explanation to the letter that had gone viral on social media,  the bride said it was written two months ago when she had planned to elope with Priyank. However after persuasion and counselling by family members, she changed her mind to marry Priyank and agreed to tie knots with Kshitij with whom her marriage was solemnised on Monday.

On the bride’s statement police arrested 27-year old Priyank Jeengar, his friends Puneet Nagda (24), Harish Patel (21) all residents of Savina, Udaipur, Vijay Singh (20) and UdaiSingh both ro Chittorgarh district. The five accused have been arrested on charges of physical assault, abduction, robbery and conspiracy under sections 307,365,395 and 120(b) of the IPC. The bride said she was taken to Chittorgarh in the car and from there the youths took another car for Bhilwara. From there Vineeta and Priyank got into a private travel bus for Jaipur. However,  Police tracked their location and instructed the bus driver not to stop the bus anywhere and take it straight to Jaipur where the couple were held around 3am.

The bride’s twisted statement, her letter viralled on social media, the couple’s constant communication through text messages and mobile conversations, Priyank and Vineeta’s efforts to get their marriage registered at Municipal Corporation six months ago etc are some questions that raises suspicion on the police action and hastiness in sending the youths to jail and letting the bride go unscratched while she had been involved in the entire episode.Udaipur SP KailashChandra Vishnoi said ” Prima Facie Vineeta ‘s statement that she was abducted goes against Priyank and his friends. Vineeta’s husband Kshitij has mentioned in the complaint that the bride was wearing 35 tola gold at the time she was forcibly taken away.

Vineeta also stated that the letter wherein she said written of going away with Priyank was two months old and after that she changed her mind to marry him” . Police is yet to get hold of the hard copy of the letter which was made viral on social media by one of Priyank’s friends. However the authorities did not have a valid explanation to questions pertaining to the kidnap charges. The couple had taken a bus from Bhilwara to Jaipur and the bride did not resist or struggle while being taken in a bus that was full of passengers. The exchanges of text messages,  conversation on mobile would be other strong evidences against the bride to prove her involvement in the abduction episode,  sources claimed. Sources also said that police had hastily charged the youths in a one sided action without properly investigating the case and in this way been partial in face of immense pressure from the bride and groom’s family.