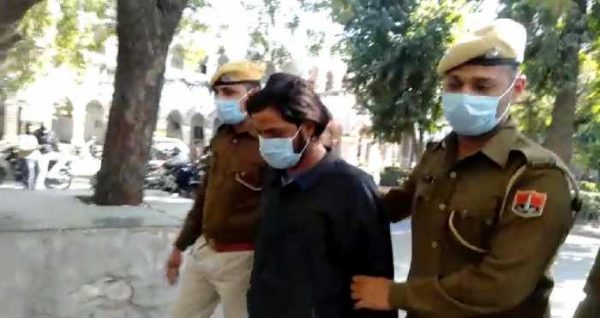 Udaipur : Udaipur police on Saturday arrested an LLB student for giving rape and life threats to a Delhi based journalist. Rohini SIngh, the scribe had taken to the social media and complained to chief minister Ashok Gehlot and Udaipur IG Satyaveer Singh urging the government to take action against the man. “Our team has arrested Kapil Singh (26) son of Padam Singh Meena, resident of Semari for threatening the lady journalist on social media. He is presently living in Sector 14 area at a relative’s home” the IG told the media.

Surprisingly, the accused is a second year student of LLB course and the cops too were amused that someone graduating in law would dare such an act despite knowing the consequences. Sources also said the accused was connection with the ABVP. A case has been registered under sections 506 and 509 of the Indian Penal Code (IPC) and Section 67 of the Information Technology (IT) Act.

During interrogation, the accused told the police that he did not agree with the posts that the journalist posted on her twitter account regarding the farm laws and the farmer’s movement. He was infuriated by her views and hence he sent her the threatening posts. On receiving the post, Rohini Singh had tagged Ashok Gehlot and IGP Udaipur demanding urgent action. Gehlot who took the complaint seriously, instructed the police department to take quick action. The cyber cell and technical experts were pressed into service which traced the culprit within a few hours and nabbed him.

Later, Rohini Singh through her tweets, said disagreements should never be an excuse to indulge in abuse and rape and murder threats. We need safer spaces for women-online and offline. Later, in another tweet she also said that she knew the seeds of hatred had not been sown by the accused, neither is he responsible for making questioning a crime in democracy. Hence, I request the police to let him go after counselling, she tweeted.