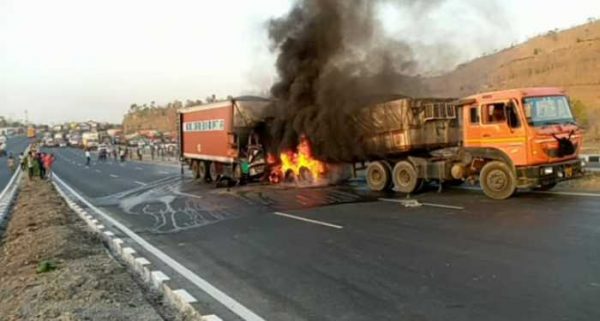 Udaipur : A container driver and his helper were charred to death on Friday morning when their vehicle hit a truck heading ahead on  the Udaipur-Ahmedabad National Highway-8 under Rishabdeo police station limits of Udaipur district.

Rishabdeo SHO Yogesh Chauhan said due to the severity of the collision, the coal load caught fire and  the flames engulfed the cabin of the trailing vehicle. The flames were so intense that it spread within minutes and the container driver and helper could not come out of the cabin and were burnt alive. A large traffic jam prevailed for some time.

Rescue  teams arrived and pulled out the burnt bodies that have been shifted to the mortuary. The vehicles were removed with the help of a crane and commutation was restored on the highway. Over speed is told to be the reason for collision. The bodies are yet to be identified, police are tracing the details of the container owner on the basis of the registration number.