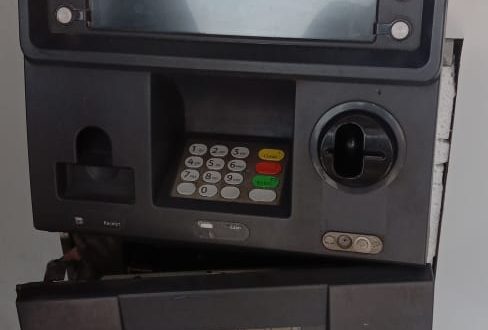 Udaipur : Robbers failed in their attempt to break open two automated teller machines (ATM) on Pacific University main road under Pratapnagar police station area near Udaipur city on Monday night. The robbers sprayed black paint on the CCTV cameras after entering inside the kiosks and hence the police could not get any footage of the robbery attempts.

Two ATMs of Bank of Baroda and Axis bank , situated on the main road, were targeted by the robbers as they tried to open the machines with gas cutters but failed and hence were unable to loot money. Surprisingly,  the night patrolling team did not have any clue of the incident until in the morning when residents informed the police.

Residents expressed discontent over the incident and demanded increased security and better patrolling in the area. ” My grocery shop is situated just next to the Axis bank ATM where the robbers attempted a loot on Monday night. Few months ago, some thieves broke the side wall of my shop and stole many items. The night patrolling is poor and therefore robbers have no fear of law. The shopkeepers in the area are concerned due to frequent thefts and robbery in the area” Rajesh Sharma, a grocery seller said.