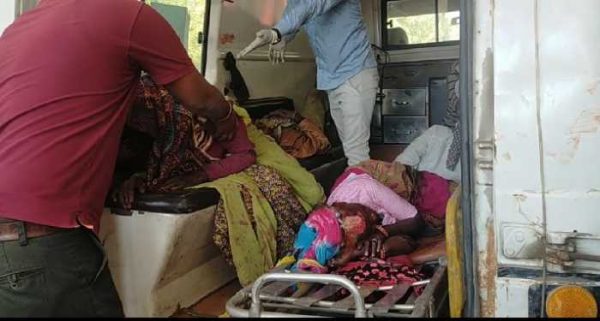 Udaipur : Three persons including 2 women were killed and atleast 20 injured when a roadways bus overturned after being hit by a truck near Rithola junction in Chittorgarh on Friday afternoon. The bus was going from Udaipur to Bhilwara and had taken a village road. When from the service road the bus driver took the highway, a truck while taking a U-turn near a cut hit the trail part of the bus. Due to the impact of the collision, the driver lost control and the bus overturned.

Three persons died on the spot while some 23 persons were injured. ” The deceased have been identified as Kiran Prakash (25) son of Gopal Sen from Magalwar, Jyotsana (25) wife of Suryaveer SIngh, Chittorgarh and Ramu Gurjar (20) daughter of Gangrar. Two of the injured are seriously hurt and referred to Udaipur” Darshan Singh, SHO Sadar police station said.

Collector KK Sharma, ADM Ambalal Meena, Additional SP Tripti Vijayvargiya and many officials rushed to the spot while more than a dozen ambulances were sent from the district hospital to carry the injured passengers to hospital. Panic hit the highway soon after as a large number of people gathered at the spot and tried to rescue the passengers and pull them out of the vehicle. Broken window panes and glass pieces were seen scattered on the road.

Police cleared the blockade after a crane lifted the bus and shifted it to a side. While some of the passengers said, the bus driver was careless while entering the highway and speeded the vehicle while a truck was already ahead trying to overtake another truck. A couple who were standing near their bike on the roadside too were injured after the bus overturned and hit them. Meanwhile police said a case has been registered and an investigation is underway.