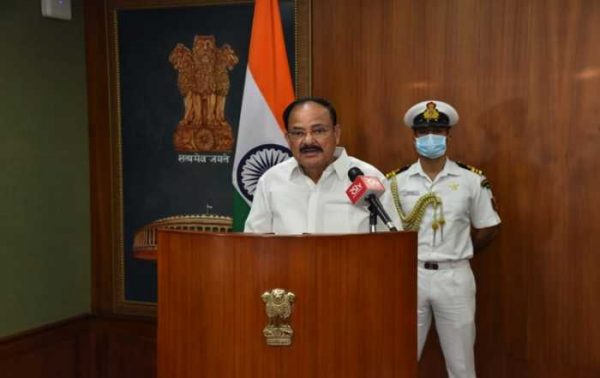 Delivering the 41st Convocation Address of the Tamil Nadu Agricultural University (TNAU), he stressed the need for developing climate resilient crops/varieties which can withstand a broad-spectrum of stresses such as drought, flood, heat, salinity, insect-pests and diseases. He emphasized that developing stress-resistant varieties along with climate adaptation strategies is the key to increase the resilience of Indian agriculture and make it sustainable.

Cautioning about the negative impact of climate change on agriculture and food systems in coming decades, Naidu called for development of technologies and methods, which can lessen the vulnerability of small and marginal farmers.

The Vice President described agriculture as a profession that is not just important but sacrosanct. Referring to agriculture as the backbone of rural economy, Naidu said that agriculture has always been an integral part of our culture and civilization. “More than 50 per cent of our population is still dependent on agriculture for their livelihood”, he added.

The Vice President said “to augment farmers income, we must strive to improve productivity, efficiently use resources, increase cropping intensity and diversify to highly value crops”. He emphasized that every effort must be made by all the stakeholders to ensure that the farmers receive remunerative prices. This could be done through better storage and processing, provisioning of farm inputs, financing and efficient marketing mechanisms for sale of output, he suggested.

Praising the farmers for displaying indomitable spirit and dedication during the pandemic, Naidu noted that agriculture is one sector that has performed well despite the challenges posed by the ongoing Covid-19 pandemic. In fact, the area under kharif cultivation has increased by around 59 lakh hectares as compared to last year, he said and attributed this larger coverage to timely inputs by the government like seeds, fertilizers and credit even during the lockdown.

The Vice President said that the farmers must be allowed to sell their produce anywhere in the country and the principle of common market for the entire country was behind the conception of e-NAM and we must expand it, he added.

Shri. Venkiah Naidu also reiterated the importance of creating adequate infrastructure like cold storages, godowns as well as providing affordable credit to farmers. Observing that the need of the hour is to provide a helping hand to farmers, he appreciated the Central and State governments for taking many initiatives for the welfare of farmers, given the vagaries of the monsoon and uncertainties in agriculture.

Observing that the Government of India has taken a number of steps to revitalize agriculture in the recent years, Naidu remarked that there has been a paradigm shift and the focus has been on doubling the farmers’ income. Citing the implementation of Pradhan Mantri Kisan Samman Nidhi (PM-KISAN), he said it is a boon and will benefit more than 72 percent of India’s farmers.

Enumerating the benefits of emerging technologies such as CRISPR-Cas9 gene editing tool, the Vice President said they hold immense potential to transform agriculture by making plants tolerant to biotic and abiotic stresses and improving their nutritional value and yield. Appreciating TANU for adopting modern technologies, he wanted it to further intensify the research in various areas.

Observing that agricultural mechanization is crucial for modernization and commercialization of agriculture, the Vice President called for developing need-based machinery. “Use of improved implements has the potential to increase productivity up to 30 per cent and reduce the cost of cultivation up to 20 per cent”, he added.

Naidu lauded the performance of Tamil Nadu in water management, agriculture and allied activities and said that the state has been exemplary in terms of adoption of new high yielding varieties and technologies to increase production.

He appealed to the passing out graduates of TANU to spearhead technology-led sustainable agricultural development, enable farmers to realize better incomes and ensure food and nutritional security to the teeming millions of our country. “Your research must be relevant to society and focus on finding solutions to various problems faced by mankind from climate change to health issues”, he told them.

Following is the full text of the speech-

“It gives me a great pleasure to take part in the 41st Convocation of this renowned Agricultural University which is widely admired for its contribution to agricultural research and education. I congratulate all the graduating students who are receiving various degrees, awards and distinctions from this outstanding institution.

My compliments to all the teachers and parents for mentoring the students and empowering them with quality education and inculcating the right attitude and values in them!

I am happy to note that the alumni of this institution are holding important positions in renowned research organizations, policy making bodies and civil services.

Agriculture has always been an integral part of, not only our economy, but also of our culture and civilization. Hence, my dear friends, you have chosen a profession, which is not only important but also sacrosanct. As a matter-of-fact, agriculture is very close to my heart andI hail from a predominantly agrarian region known for rice cultivation.

With more than 50 per cent of our population still dependent on agriculture for their livelihood, this sector is the backbone of our rural economy. Therefore, the need of the hour is to make agriculture climate-resilient, profitable and productive, while ensuring food and nutritional security to millions of people.

We are now in the midst of a pandemic that has disrupted every sphere of activity and impacted India and rest of the world in an unprecedented way. While the Indian economy is projected to contract this year, I am confident that it will bounce back with an impressive growth rate in 2021 and regain the position of the fastest growing emerging economy.

In this pandemic period, while all the other sectors contracted, agriculture alone performed well and provided vital support to the economy.  In fact, there was no impact of COVID-19 on the area covered under kharif crops. The area under cultivation has increased–around 59 lakh ha more area was reported under kharif crops as compared to last year. The timely prepositioning of inputs by the Government of India like seeds, pesticides, fertilizers, machinery and credit has made it possible for larger coverage during the lockdown conditions.

Food grain production is pegged at a record 144.52 million tonnes in the 2020-21 kharif season compared to 143.38 million tonnes during 2019-20, notwithstanding COVID-19 crisis. I salute the farmers for displaying indomitable spirit and dedication even during the most difficult times.

It is a matter of concern that water tables are going down and irrigation sources are getting increasingly polluted, posing a major challengefor increasing agricultural production, especially in a water-scarce state like Tamil Nadu. This calls for breeding efforts to develop drought-tolerant genotypes and water saving technologies.

I understand that Tamil Nadu Agricultural University has made a mark in the field of developing engineered genotypes using traditional and biotechnological tools for biotic and abiotic stress resistance. I would like you to further intensify the research in this area. A crop variety with inbuilt resistant capacities can avert many of the climatic problems.

In this context, it is pertinent to appreciate Tamil Nadu for bagging the ‘Best State Award for Water Management’ for the year 2019 from the Ministry of Jal Shakti, which I have presented to the State on 11th November 2020.The performance of Tamil Nadu state in Agriculture and allied activities over the years has been exemplary not only in terms of production but also in terms of adoption of new high yielding varieties and technologies resulting in highest productivity.

The direct impact of climate change over the next few decades will be on agriculture and food systems. This situation calls for development of climate resilient crops/varieties which can withstand a broad-spectrum of stresses such as drought, flood, submergence, heat, cold, salinity, insect-pests and diseases.

For this reason, any effort to increase the resilience of Indian agriculture must aim at developing stress-resistant varieties and other management practices to adapt to climate volatility. Technologies and methods, which can lessen the vulnerability of small and marginal farmers, are needed to ensure sustainable agricultural development.

Genome editing in general, and CRISPR-Cas9 in particular, are revolutionary tools that can impact science, food production, and society in the days to come. This technology has great potential to transform agriculture by making plants tolerant to biotic and abiotic stresses and improving their nutritional value and yield.

I am happy to note that this University has already started using this technology for accelerated crop improvement. For example, it is used for augmenting beta-carotene and aroma in rice, imparting resistance to salinity and for herbicide tolerance, among others.

Agricultural mechanization is crucial for modernization and commercialization of agriculture. Use of improved implements has the potential to increase productivity up to 30 per cent and reduce the cost of cultivation up to 20 per cent. There is a need for greater attention on developing need-based machinery.

I am happy to note that Tamil Nadu is giving assistance for machine transplanting of paddy and promoting Custom Hiring Centres in a big way. At this juncture, I wish to add that exploiting solar power for varied field operations like lighting, fencing and drying of produce is the need of the hour.

Nanotechnology is an emerging new field. It can be gainfully used in tackling some of the problems in agriculture. I appreciate TNAU for being a pioneer in this field by setting up a dedicated Nanotechnology Center for Agricultural Research as early in 2010.

I am told this Center has developed, among other things,nano-diagnostics for on-site detection of moisture, nutrient deficiencies and pesticide residues andnano-agricultural inputs.

The Government of India in recent years has initiated a number of steps for revitalizing Agriculture. There has been a paradigm shift and the focus has been on doubling the farmers’ income. The recent implementation of Pradhan MantriKisanSammanNidhi (PM-KISAN) is also a boon to benefit more than 72 per cent of India’s farmers. This income support in combination with subsidies provided by various schemes could have a multiplier effect on economic benefits to the farmers.

To augment the farmers’ income, we must strive to improve productivity, efficiently use resources, increase cropping intensity and diversify to high value crops. Every effort must be made to ensure that the farmers receive remunerative prices through better storage and processing and efficient market mechanisms for farm inputs, financing, and sale of output. Also, It is our sacred duty to protect the environment and pass on a safer and greener planet to future generations.

As graduates of this reputed Agricultural University, I call upon each one of you to spearhead technology-led sustainable agricultural development,enable farmers to realize better incomes and ensure food and nutritional security to the teeming millions of our country. Your research must be relevant to the society and focus on finding solutions to various problems faced by mankind from climate change to health issues.

Let us not let the impact of Covid 19 dampen our spirits and thoughts for tomorrow. As you graduate into a world that is more challenging, remember to embrace the changes, face boldly the challenges and tap the opportunities that lie ahead. You have to shoulder the responsibilities of creating a better world with innovation, creativity and compassion.

The Tamil Nadu Agricultural University has earned many laurels in its more than 100 years of existence. I am sure that the university will keep up its quest for excellence and achieve many more landmarks in the years ahead. My best wishes to all of you!

Friends, as I conclude, I would like the youth of the country to think of posterity and ensure that our future generations inherit a beautiful, bountiful, green and a livable planet.