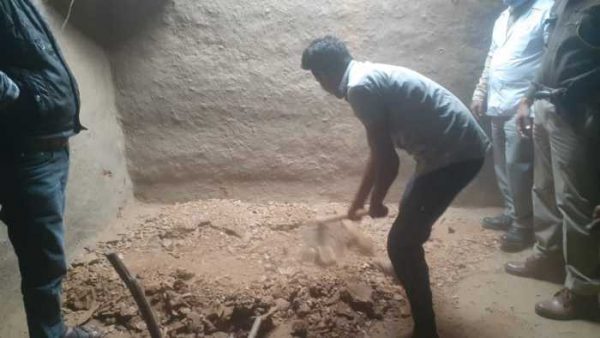 Udaipur :  A man’s decomposed body was found buried in a hut in Robiya village of Kherwada block in Udaipur district on Thursday. The body was identified to be of Baggu son of Rupsi who had moved to Gujarat some years ago and lived there with his family.

Kherwara SHO Shyam Singh said the deceased had 3 daughters and 3 sons , two of the daughters had been married off but the villagers didnt know anything about the grooms or even Baggu’s whereabouts as they rarely came to the village.

According to the officer, Baggu was only in contact with his brother Ramesh who sometimes called him over phone. Ramesh told the police that his brother and his family had visited Robiya last in November for Diwali but after that no one had seen them. Ramesh said that it had been quite some time that he spoke to his brother and hence he went to his house to find if there was someone. Ramesh found the house open and stinking.

A part of the floor appeared to have been dug, The villagers gathered and informed the police. Kherwada police team arrived and when they dug the ground, the decomposed body was recovered.

The SHO said body was sent for an autopsy and later given to his brother. A case of murder against unidentified person/persons have been registered and an investgation is underway.