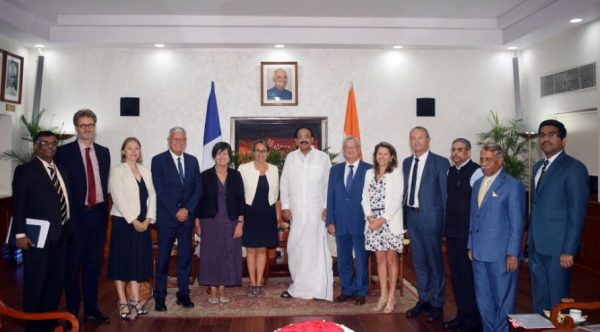 The Vice President of India, M. Venkaiah Naidu has described India-France Strategic Partnership as an important pillar of India’s foreign policy and said that India and France could act as harbingers of peace and stability.

Interacting with a delegation of French Parliamentarians led by Mrs. Sophie Primas, the Chair, and Senate Standing Committee for Economic Affairs, in New Delhi today, Naidu called for closer cooperation between India and France to promote peace and harmony in the world.

Observing that India valued its partnership with France on defence cooperation, maritime security, counter-terrorism, space co-operation, economic partnership, and the other areas, the Vice President suggested the setting up of Indo-French Parliamentary Friendship Group to promote closer ties between the two nations. He also expressed happiness over France’s decision to partner with India under the Smart Cities initiatives. India’s development needs require massive investments in urban renewal and clean energy, he added.

Calling for greater trade, technology, and capital flows between the two nations, Naidu said the bilateral trade momentum needs to be multiplied to reach the set target of trade in goods to 15 bn Euros by 2022.

Stating that Climate Change was an article of faith for the Indian government, Vice President reaffirmed India’s commitment to Paris Agreements and said that India was on way to achieve the goals well in advance. He commended France on the initiatives in this regard and in particular, for holding the One Planet Summits.

Naidu also recollected his visit to France during the centenary of World War I Armistice held in November 2018 where he had inaugurated the first Indian War Memorial in Villers Guislain in the memory of more than 9,000 Indians, who sacrificed their lives in that war.

Referring to the longstanding and multifaceted space cooperation between India and France through ISRO and CNES, he said, “We are committed to carrying forward this cooperation”.